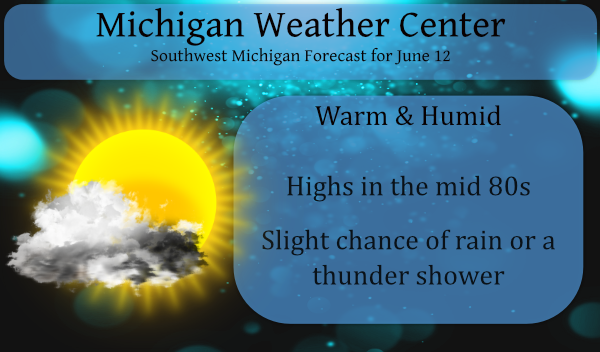 Here are some fun weather lore sayings about June.

Now just like winter folk lore this is all just for fun.

Now while not folk lore but more a fact in the past years that June was more that +2.0 above average July that year was also warmer that average in most years. (1954, 1971 and 1954 were exceptions) but the following August was either average or cooler than average in most year that had a June that was +2 or more.

Big cell to our NE with a hook echo. Just like yesterday, it’s missing us by just a few miles.

As for the weather this past week, it has been brutal. Smothering hot and missing most of the rain in every direction. Recorded 4 days of 90 or better, and about all of them with a heat index well into the 90’s. I see all morning today GR is reporting overcast with fog and mist. I went to work at 5 a.m. and it has been clear and sunny all morning, temps already up to 80 degrees. GR stuck under a dark cloud?

It was indeed cloudy here all morning. The sun is now out and the temperature here at my house is 77 with a DP of 67. The last reading at GRR was 72 with a DP of 65. There is a nice and cool east wind at this time.
Slim

Thanks Slim. Odd sayings. You wonder where or why they ever came up with such oddball things. Must have been superstitious times.

Thanks Slim for the folklore… love it. YEARS ago the weather channel (when it was starting out) did a folklore calendar. My dad got it as a gift. I loved reading that thing.
My grandfather was a farmer and lived to be 100… so you can imagine the folklore we heard growing up.

The overnight low here at my house was 66 the official low at the airport was a little cooler at 63. At this time it is cloudy and 69 here with a Dew point of 63. There was no rain here yesterday but in northeastern lower and to the east there was some storms yesterday with some high winds and heavy rain.
Slim