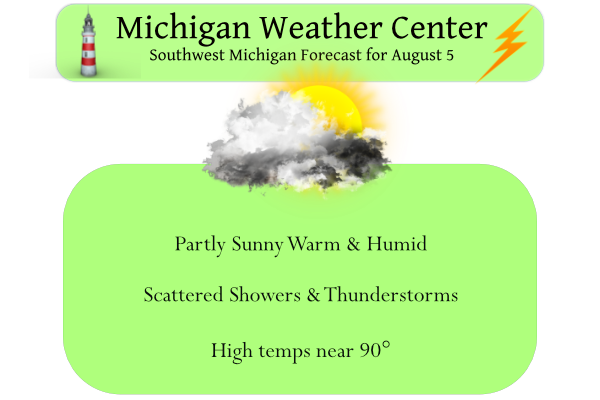 Most of our area (Allegan County) has had power restored but Charter Spectrum was still working on cable repairs yesterday.  Our cable supplies our internet, phone, and TV which we were without most of yesterday.  Good thing we still had cell service though I hate typing on my cell, my thumbs are too big.

It will be warm and humid today with highs in the mid to upper 80s away from the Lake Michigan Beaches. Expect scattered showers and a few thunderstorms. Locally heavy rainfall is possible from some of the thunderstorms.  We expect the heat to continue through the weekend with temperatures near 90°.

1883: Very heavy rains during June and July cause the Grand River to rise to unusually high summer levels. Lumber companies use the high water to float logs to a log boom upstream of Grand Rapids. The logs broke loose and crashed into the Detroit, Grand Haven & Milwaukee Railroad bridge creating a jam estimated at thirty-feet deep and seven-miles long. Sections of Grand Rapids were flooded by backwater. Eventually the bridge gave way and several bridges downstream were damaged by the cascading logs.

1917: A heat wave produced record highs in the upper 90s as July ended, with Grand Rapids hitting 98 degrees and Lansing 96 degrees. There were also record high minimum temperatures of 79 degrees at Grand Rapids and 74 at Lansing.

1886: A tornado moves from northern Kalamazoo County into Barry County, damaging several farms in and near Hickory Corners.

1947: What turns out to be the hottest August on record starts off on a decidedly cool note with record lows of 48 degrees at Grand Rapids and 43 degrees at Muskegon.

2002: A tornado struck north of Tustin in Osceola County. The tornado left a damage path six miles long, with dozens of large trees down and some roof damage to homes. One house had its attached garage destroyed. A weaker tornado also hit near Grant in Newaygo County, toppling a tree.

1927: Morning low temperatures fall into the lower to mid-40s during one of the coolest Augusts on record. Daily record lows are set at Lansing with 40 degrees, Muskegon with 42 and Grand Rapids at 46.

1964: Muskegon sets an August record and ties their all-time record high temperature at 99 degrees. The temperature hits 100 degrees at Grand Rapids, a record for the date.

1894: The second record cool morning in a row at Lansing with 37 degrees. Grand Rapids also sets a record low for the date of 42 degrees.

1988: A hot and dry summer continues with record highs of 96 degrees at Lansing and Grand Rapids and 92 degrees at Muskegon.

1947: The temperature hits 93 at Muskegon and 100 degrees at Grand Rapids, where it will reach the century mark again the next day. A total of 17 days during the month had high temperatures of 90 or above at Grand Rapids. This is the hottest August on record for Lansing, Grand Rapids and Muskegon.

1955: A tornado injured one person in Hastings and another tornado caused minor damage near Norvell in Jackson County.

1998: A small tornado downed trees and did minor damage to an outbuilding at Hamilton in Allegan County.

On July 31, 1925, greatest rainfall for a calendar date in Detroit occurred on this date when 4.74″ fell. Also, back in 1891 this date marked the end of the coldest July ever recorded in Detroit, with a mean temperature of only 67.2 degrees, well over six degrees below the current norm!

On August 1, 2018, a low-pressure system brought heavy rain to the region which provided relief after an abnormally dry July. 1 to 3 inches of rain fell with some localized areas seeing 4 inches – most of it during a 3-hour period or less during the overnight period. This led to areas of flooding, specifically over Dearborn Heights and Taylor where several feet of water was reported over roadways the following morning. Additionally, a weak EF0 tornado was reported in Taylor shortly after midnight and resulted in minor damage near the Southland Center.

On August 2, 2006, severe thunderstorms repeatedly moved along the Interstate 69 corridor during the evening hours. The storms produced severe winds that downed many trees. The training nature of the storms produced up to 10 inches of rainfall in northeast Lapeer and southwest Sanilac Counties. The town of Brown City was especially hard hit by flooding. The flood resulted in about 2.5 million dollars in damages.

On August 3, 1944, record high temperatures of 98 degrees on the 3rd and 97 degrees on the 4th were reached in Saginaw. Also on this date, the record for the lowest sea-level pressure for August in Detroit occurred: 29.14″!

On August 6, 1918, the temperature soared to 104 degrees in Detroit while Saginaw recorded 103. Both are the record maximum temperatures for the month of August.

Found another house on my street with a big limb laying down in it. That’s a few miles south of me in the small town of Mulliken in northern Eaton County. Lots of limbs down. That little town took a pretty good hit.

Phew warm start to August in what has been a warm summer. So far, CPC and Accuweather both say a couple more warm months are ahead.

Last evening was a nice August evening- red sun with distant thunderstorm clouds around 8 and then the Perseid meteor shower closer to 11. It remained rather warm and muggy all night but with the return of more clouds this morning.

Third consecutive day with the low remaining above 70, and humid too. I just mowed on Tuesday and I need to mow again this weekend. Before Tuesday, I believe I only mowed twice in the past five to seven weeks. It’s amazing what some precipitation (2″ in two days) can do.