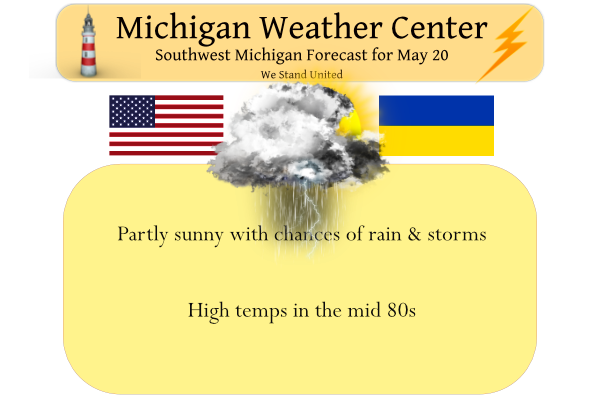 We have 64° at 4:30 this morning.  There was a trace of rain from a few sprinkles passing through Otsego yesterday with a high of 77.5° and a low of 51°.  Today we will see more summerlike conditions with partly sunny skies and high temps well into the 80s.  It will also be breezy, with southerly winds 10 to 15 mph increasing to 16 to 21 mph in the afternoon. Winds could gust as high as 32 mph.  We have chances of rain and storms through Sunday morning, chances increase tonight through tomorrow.

At least one fatality, unfortunately.

I was inside the tornado in Gaylord. I went storm chasing and was off the main exit just off I-75. I’m thankful to god to be alive. My car was hit with debris and came close to totally flipping the car. I got insane video. It touched down very rapidly and intensified coming into town. I was ducked down in my vehicle and thankfully not a scratch on me. The damage is horrible. I’ll update later.

Holy cow! I’m glad you’re safe. Don’t ask me how, but see if you can get your vid posted here.

Somehow my car does not have a scratch on it. I keep a small angel in my center console and a Bible behind the seat. Think god was taking care of me in that moment. I’m still in shock

Wow crazy! Glad you are okay!! And that is some stunning video

Crazy and my idea of storm chasing is get as far away as possible! Some storm chasers have lost their lives trying to see a tornado! No thank you!

Nice vid, Kyle. I noticed Charles Russell commented. There’s a name I haven’t heard in quite some time.

Glad you are safe! You had your Guardian Angel working overtime today.

Wow! That was just crazy! Was that a person running outside in front of your car? Just nuts!

Meanwhile, 88 here and 81 in GR. The air is soupy and I am looking forward to the cold front.

That tornado hit Gaylord. Some pics:

MD for up north:

There is now a watch for northern lower and several warnings as well. Latest radar shows some storm there but not really way out of line at this time.
Slim

They’re still talking about the possibilty for big hail. From that watch:

With some past talk of how GRR has been cooler than some other areas today seems to be a big exception. As Holland, Grand Rapids and Lansing with 85 are the warmest locations in southern lower Michigan with a 87 with down slopping winds at Alpena being the warmest.
Slim

Wanna to hear something crazy? Freeze Warnings from North Dakota to Colorado. Winter Storm Warnings in Colorado up to southern Wyoming. …WINTER STORM WARNING REMAINS IN EFFECT FROM 4 PM THIS AFTERNOON TO NOON MDT SATURDAY… WHAT…Heavy snow expected. Total snow accumulations between 3 and 10 inches, heaviest amounts near the foothills and southern portions of the Denver metro area. Lighter amounts toward Fort Collins. WHERE…Fort Collins, Boulder and the western suburbs of Denver, and Denver. WHEN…From 4 PM this afternoon to Noon MDT Saturday. IMPACTS…Heavy snow will accumulate on tree branches and powerlines, possibly causing them to break and… Read more »

Enhance risk coming for GR to Lansing north is my guest with the next spc out look around 1230pm stay tuned..InDY

Good call on the time. The slight risk area moved even farther north.

And the current radar would support that northward trend.
Slim

Area Forecast Discussion National Weather Service Grand Rapids MI 1107 AM EDT Fri May 20 2022 LATEST UPDATE… Update .UPDATE… Issued at 1022 AM EDT Fri May 20 2022 – Severe storms remain possible after 3 pm through 10 PM. The cold front continues to move through Eastern MN and through WI late this morning. The front will reach Michigan around 3 PM with convection firing along and out ahead of it. An inversion remains in place and temperatures will need to be into the 90s for surface instability to breach that inversion. That inversion will be the limiting factor… Read more »

After this big stretch of heat, it looks like some more is brewing!

My yard is looking super green and lush. My hostas are close to blooming. Last year, this didn’t happen until July!

The blooming time looks to depend on the variety
When and for how long hostas bloom depends mostly on the variety. “Blue Wedgewood” and “Blue Umbrella” grow in U.S. Department of Agriculture plant hardiness zones 3 through 8, and bloom for a few weeks in June. The August lily (Hosta plantaginea) grows in USDA zones 3 to 9 and blooms in late summer to fall.
https://homeguides.sfgate.com/long-hostas-bloom-71220.html
Slim

Update from SPC. Sounds as if any supercell that manage to for could produce 2”+ hail. Sig-Hail probabilities have been introduced from Gratiot, Montcalm and points north and east.

“The most favorable buoyancy/shear parameter space for severe thunderstorms — including a few supercells with a tornado threat, damaging winds and large to significant hail — will be across
central/northern Lower MI.”

That would be just to the northeast of the Grand Rapids area.
Slim

Of course if modeling is off by 50 miles then GRR could still get some action. But yes looks like highest changes are to the north of GR. 2 inch hail is pretty crazy!

No kidding. That size hail would be very damaging.

The official H/L yesterday at Grand Rapids was 75/51, officially 0.01″ of rain was reported. The overnight low in MBY was 61 and the official overnight low at GRR was 62. At the current time it is sunny and 69 here at my house. The forecasted high today is 85. That would a top ten warmest for this date the record high of 92 set in 1977 looks very safe it was 90 on this date in 2012 and just last year the high reached 88. It looks like the best chance for storms has now moved to the north… Read more »

Im thinking enhanced risk coming for GR to the north on the next update plus we may have flooding rainns to lots happening today ..INDY

The cap has broke the severe weather chances are rising the possibility of Tornadoes is a good bet this afternoon in lower Michigan someone maybe getting a F3 Tornadoe somethings to keep in mind heading into the afternoon very serious weather situation unfolding right now ..Stay safe everyone INDY

Yesterday GR hit 75 degrees. Average high was only 71. Today we will hit the mid 80’s. I’m loving it! Especially just after our blowtorch last week.

It should be noted that the high of 54 on May 18th was the 5th coldest maximum of any May 18th at Grand Rapids. It was the 7th coldest maximum at Lansing and Holland. The forecasted highs next week would be 5 to 10° below average.
Slim

Why should that be noted? LOL

Keep the facts rolling Slim! I love it!

The severe weather parameters in place across Central and Northern Lower Michigan are definitely something to not take lightly. It ultimately remains to be seen how everything materializes over the coming hours but there is definite signs for maybe some supercells in the state today. I’ve looked at the GFS, NAM, HRRR and all show decent parameters and favorable sounding for supercells and maybe a couple tornadoes. The issue for West MI is the capping that is in place, especially from GR to the south. Capping doesn’t appear to be as strong to the north, which appears to be where… Read more »

Our local mets this morning said they’re not too confident as to chances of precip in this area tonight and tomorrow. Hit and miss…..but more miss than hit. They did say that anything that pops up/evolves can have the potential of becoming severe.

I’m hoping for more miss than hit. The East Lansing Art Fair is this weekend. 🙂

Yeah we have our community wide garage sales the next couple days so people are looking for good weather here as well.

Get ready for the major cool down! Below normal temps will rule this weekend and next week! Wow just wow! The below temp pattern still dominates! Who would have thought?