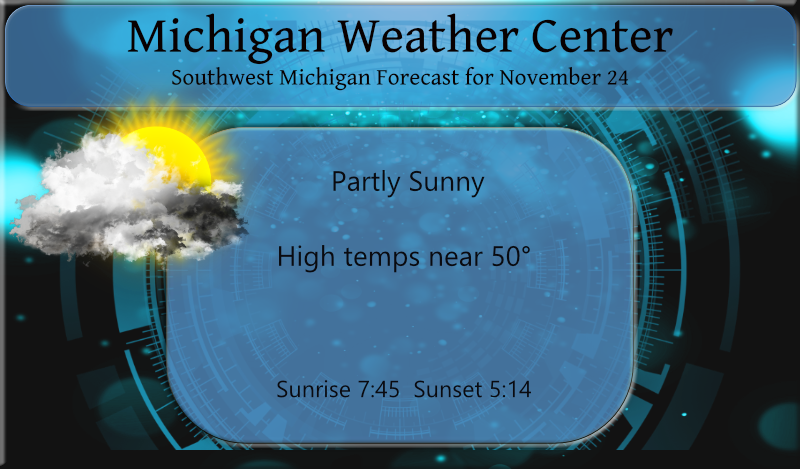 Temps are almost 20° warmer this morning than yesterday morning’s lows.  It is currently 36° at 5 am.  Yesterday’s high was 42° with mostly sunny skies and the low was 17°.   Below is the forecast for the Thanksgiving holiday:

A chance of snow showers, mixing with rain after 11 am, then gradually ending. Mostly cloudy, with a high near 38.

1913: Record warmth prevails across Lower Michigan with high temperatures in the upper 60s and lower 70s. The 70 degree reading at Grand Rapids is a late-season record.

1963: President John Kennedy is assassinated in Dallas, Texas. The weather in Lower Michigan is unusually warm with morning lows around 50 degrees and afternoon highs in the 60s. The month ends up being one of the warmest Novembers on record.

1950: A massive storm moves through the northeast United States, producing blizzard conditions and record low pressure, and drawing extremely cold arctic air south across Michigan. The bitterly cold air results in high temperatures only around 10 degrees, with record lows down to nine below zero at Grand Rapids.

1989: Severe weather strikes Lower Michigan with downburst winds and tornadoes. A tornado did a quarter-million dollars of damage as it cut a six-mile path south of Portland in Ionia County. Another tornado caused minor damage over a three-mile-long path south of Durand in Shiawassee County.

On November 21, 2015, a record-setting snowstorm hit Southeast Michigan. Snow began early in the day and gradually increased in intensity with widespread snowfall rates of 1 inch per hour. A particularly intense band brought rates upwards of 3 inches per hour to Howell, where a storm total of 16.8 inches was reported. In fact, numerous locations reported snowfall amounts between 10 and 16.8 inches in Livingston and Oakland Counties. The NWS office in White Lake measured 15.5″ making it the largest snowstorm the office has seen since it was built in 1994.

On November 22, 1880, there was an exceptionally early cold wave in Detroit which commenced on the 18th and lasted 6 days all with record lows with the bottom hitting zero on the 22nd. This resulted from an arctic high pressure measuring near 31.00″ over Ohio.

On November 24, 2004, a potent storm system lifted out of the Southern Plains and moved through the Central and Eastern Great Lakes region this particular Thanksgiving Eve. The precipitation started as rain but changed to snow as the cold air filtered into the storm. Snowfall rates exceeded an inch per hour for a period, as thundersnow was reported. Due to the convective nature of the wet snow, snowfall accumulations varied significantly within and across the counties, generally ranging from 2 to 8 inches. Gusty northeast winds of 30 to 40 mph further aggravated the situation, causing scattered power outages, and reducing visibilities to a quarter of a mile or less at times. Some of the higher snowfall reports that were received included Poseyville (Midland county), 9.2 inches; Auburn (Bay county), 6.4 inches; 7 miles west of Flint (Genesee county), 8.1 inches; Fairgrove (Tuscola County), 5.0 inches; Elba Township (Lapeer County), 5.7 inches; Howell (Livingston county), 5.5 inches; Saginaw (Saginaw County), 8.2 inches; Bennington (Shiawassee County), 6.5 inches.

On November 26, 2018, a low-pressure system with a history of producing more than a foot of snow and blizzard conditions over the central Plains moved into the Great Lakes. Locations in Saginaw and Tuscola Counties saw over 7 inches of snow, while locations in Sanilac, St. Clair, and Macomb Counties only saw a trace of snow or none at all. Flint did break their daily snowfall record for the day with 4.2 inches.

On November 26, 2002, heavy lake effect snow developed over Lake Huron as cold north-northeasterly winds passed over the relatively warm waters of the lake. A lake effect snow band moved onshore in eastern St Clair county and far southeastern Sanilac county on the afternoon of the 26th. The band then remained nearly stationary through the rest of the afternoon and into the early morning hours of the 27th. The snow was the heaviest and persisted the longest in the city of Port Huron. By the morning of the 27th, 12-hour snowfall totaled 17 inches across the northern half of the city of Port Huron, while the south half reported amounts around 13 inches. In Sanilac County, 12-hour snowfall amounts were reported as; 8 inches in Lexington, Crosswell, and Applegate.

On November 26, 1977, the snow continued to fall as cold air filtered into Southeast Michigan. The snow started on November 25 and continued into November 27. By the time it stopped snowing Detroit had 5.6 inches of new snow, Flint received 2.9 inches, and Saginaw recorded 6.0 inches.

Also on November 26, 1949, the overnight temperature dropped to a freezing -7 degrees in Flint! This is the record minimum temperature for the month of November in Flint.

On November 27, 1995, a snowstorm hit the Saginaw Valley and continued into the early morning hours of November 28. The storm left Saginaw with 11.1 inches of snow. This was on top of an already cold and snowy month. Saginaw received 23.0 inches of snow! This made November 1995 the snowiest November in Saginaw history and also the 16th snowiest month of all time in Saginaw. Remarkably, November 1995 for Saginaw is the only November to appear in the top 20 monthly snowfalls for Saginaw, Flint, or Detroit.

Look at of those pretty colors!

That is crazy impressive! 12 day snowfall of 2 inches for our area, that comes out to 0.167” per day. I’m not sure how one would even measure that. The snow deficit continues to rise.

Very cold nights are on the way! Enjoy and get ready for winter!

52 degrees and the snow deficit continues to grow. Yup, feels just like Winter. The past several anyways.

Loving this below average month of November and with more snow on the way it may end up above average in snowfall also who knew??? InDY

Starting Thanksgiving night lows in the 20’s as far as the eye can see! Incredible cold!

Meanwhile, in Michigan, it’s a nice warm sunny day to get your pre-Thanksgiving golf in! No big snow in sight.

Saw an article that this year is the latest first snowfall Denver will have ever seen (still waiting). Crazy lack of snow out west!

Over 4 inches of snow already this November in my area the most probably in 2 or 3 Novembers past with more on the way!! All of the upper peninsula has above average snowfall on the ground for November only in Michigan baby!! Incredible…InDY

Loving this early Winter weather we are having lets keep it going through mid April wooo wooo ….InDY …

I am digging the sunshine as of late. I thought our golf course was closed for the season. However, there were both golfers walking and using powered carts yesterday. There must have been 10 or so groups throughout the day. I mean, I love to golf, but only when it’s 50+ degrees.

I hope you all have a nice Thanksgiving holiday with your families. Stay healthy!

This map looks incredible! Bring it!

Who wants to see a snowstorm soon? It is going to be a wild ride this winter! All signs point towards tons of snow! Winter is by far the best season in MI! Rock n Roll will live forever!