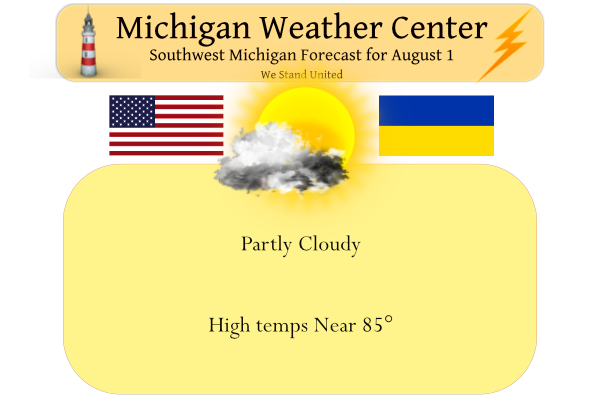 We had a trace of rain yesterday morning with a high of 80°, the low was 64°. Sunrise today was 6:37 and sunset is at 9:03 pm.  Today we will see mainly sunny skies with highs in the mid-80s, tomorrow will be another story.

One or more rounds of thunderstorms will be possible across Lower Michigan on Wednesday. As time goes on, the threat for severe thunderstorms will migrate from northwest to southeast. The later in the day that a thunderstorm develops in your area, the hotter and more humid the day will become. Any thunderstorms that develop could produce locally damaging wind gusts, large hail, perhaps a brief tornado, and potentially heavy rain with some flooding.

Below is the current outlook from the SPC for tomorrow, and I am sure there may be changes to it as time progresses.

Breaking news – the GR National weather service has very accurate temp reporting equipment and data! Average temps this summer yet some on here constantly tell us it has been a hot summer! Speaking of a joke – what a joke!

Wow basically a average Summer happing here in Grand Rapids Michigan who would of thought?? .. Its been easy peasy sofar in the heat department thats fine with me how many days until September?? Summer is going out the window fast INDY

The official H/L at Grand Rapids yesterday was 83/68 officially at GRR there was just a trace of rain reported and there was 21% of possible sunshine. Here in MBY I recorded 0.15” of rain fall. The overnight low both here in MBY and at GRR was 62. For today the record high was 98 set in 1964 and the record low of 46 was set in 1920 and 1927. There is a chance of some heavy rain on Wednesday and it looks like it will be humid and maybe even hot depending on how the morning storms play out.… Read more »

And, of course, GR is the coldest relative to average once again at 0.0. What a joke!

Looking at some other major reporting stations is the Great Lakes area for July 2022. Chicago -0.1, Rockford IL +0.2, Cleveland just like Grand Rapids +/-0.0. Erie PA +0.4. Fort Wayne -0.3. Alpena -0.5, Sault Ste. Marie -1.1. So some locations were cooler than average and some were average and some were warmer than average. As for GR if you have a issue with their reports you can write them and see how they respond.
Slim

Those other stations aren’t really comparable. GR has now been consistently cooler relative to average than the major Lower Michigan stations for a year now (since I began tracking). And probably well longer than that. I don’t really have the time to go back and look. Coupled with their cold weather bias in their write ups (compared to other NWS offices) and the seemingly more conservative leaning of their employees, I’m beginning to wonder if this is exactly what they want to report. As I told you, I’ve written them before – and their response was hardly reassuring. They simply… Read more »

I mean the GRR measuring location has not moved in the last 15 or 30 years so all the temperature data they are collecting daily is from the exact same location. The only difference is the averages are now compared to 1990-2020 instead of 1980-2010, but that is consistent among all locations. So I’m not sure what your point is, that they have been adjusting measurements to be lower in recent years or that their equipment is faulty?

The relative coldness of GR recently is very difficult to try to explain away.

Perhaps, it could be that their new “average” has a lot of years backed into it when the measurement location was different and warmer than where it is now. Moving measurement locations and then comparing today’s data to historical data at another location is definitely not ideal and not good science.

Slim, Thanks for the facts! They always get in the way of the warm weather bias and hype!