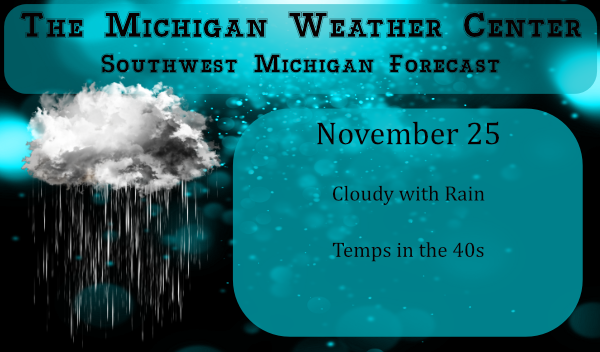 We had our first accumulating snow for November yesterday – half an inch here in Otsego.  The snow began at 10:30 am and lasted to around noon before it turned to rain with a bit of sleet mixed in.  Our high temp for yesterday rose to 39° after a low of 22°.    We had a taste of winter as the snow-covered the ground for about three hours before it all melted away.  No snow for today in SW Michigan as the temp is starting out at 41° this morning and will stay in the 40s for a wet miserable day if you are outside in it.

Tomorrow will be dry and will be good for those who want to deep fry or roast your turkey outdoors.  It will be mostly cloudy with high temps in the 40s.  My wife and I will be having baked chicken and mashed potatoes.  We are dining alone this year due to Covid, some of the family got the bug so we are all huddled in place this year.  On the plus side, we won’t have to prepare dinner for 18 this year which can be quite an undertaking for two people to achieve.  I bought a huge red oak dinner table years ago which stretches out to around eight feet with all the leaves in it which accommodates the tribe when everyone is over for dinner.

1963: President John Kennedy is assassinated in Dallas, Texas. I was in elementary school when this happened, it was a sad day when the news came over the PA system and classes were dismissed for the day early.  The weather in Lower Michigan is unusually warm with morning lows around 50 degrees and afternoon highs in the 60s. The month ends up being one of the warmest Novembers on record.

1950: A massive storm moves through the northeast United States, producing blizzard conditions and record low pressure, and drawing extremely cold arctic air south across Michigan. The bitterly cold air results in high temperatures only around 10 degrees, with record lows down to nine below zero at Grand Rapids.

1989: Severe weather strikes Lower Michigan with downburst winds and tornadoes. A tornado did a quarter-million dollars of damage as it cut a six mile path south of Portland in Ionia County. Another tornado caused minor damage over a three mile long path south of Durand in Shiawassee County.

1955: Bitterly cold arctic air is firmly entrenched across Lower Michigan. The high temperature at Lansing is only 15 degrees, after a morning low of 6. Meanwhile, a foot of lake effect snow piles up at Muskegon.

Give me cold and snow over today’s weather any day! Bring on the snowstorms and clippers and lake effect!

Nah. I’d rather be pounded with rain and above average temps this time of year.

While we heard from several on here about a month ago that “the snow will soon be flying,” GR has managed a whopping 0.4″ for the season so far. And it looks quite mild for the next 5 days.

Looks like the official snowfall yesterday in GR was 0.2” which is still less than yesterday’s average snowfall of 0.3”. Best kind of snow to get, gone in a couple hours. We will soon be half a foot below average in the snow department, great pattern to be in!

Another short winter! I love it!

just under an inch of snow at it’s peak yesterday in Hamilton. Hoping for a dry Thursday so that we can bundle up and take a nice long walk after gorging on turkey. I pray that all of you (and whomever you share the day with) find peace and things to be thankful for 🙂

Bill has his winter guess out and he is guessing for less snow than average this upcoming winter season. So we will have to see how that plays out.
Slim

I can’t recall the last time Bill actually predicted less than average snow. That’s either a terrible omen for the snow lovers or great news since his predictions the past several years have generally not been very close. Also, isn’t it a little late with snowfall predictions? I mean it’s almost December.

Great, that may mean we get hammered this winter! I love it!

Steffen forecasting “less snow than average?”…it’s safe to say we’re in big trouble, with unending snowfall this season 😉 I noticed a headline last week from NOAA, forecasting with strong confidence, “severely cold Winter, with 94-102 inches of snow.” There may be no upside this year…good luck to all.

Here at my house I had .8″ of snow fall. There was a total of 0.47″ in the rain gauge. Late yesterday afternoon there was a period of very large snow fakes. It was after that snow fall that I took the measurement. This morning of course the snow is all but gone (there is still snow in spots) and the temperature is now up to 41 here.
Slim