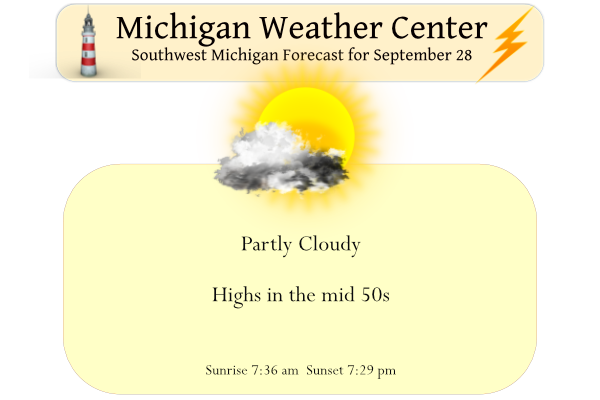 I am assembling this post Tuesday Afternoon as I will be out of town Wednesday.  At this time it appears the weather will be more pleasant than it has been the past few days with the exception of the temperatures remaining on the cool side.  Wednesday night we may be seeing some frost as temps drop into the mid-30s.

1961: Widespread, heavy rain causes some flooding across western Michigan. Record daily rainfall totals occur at Muskegon, Lansing and Grand Rapids. The 3.52 inches of rain at Grand Rapids is a record total for any day in September.

1951: A tornado killed one person and injured three others near Bitely in Newaygo County. The tornado destroyed a tavern, carrying steel beams from the roof about 70 yards.

1965: Wet snow mixes in with rain across parts of western Michigan for a very early taste of winter.

1998: The temperature hits a record high of 89 degrees at both Grand Rapids and Lansing. The warm weather fuels a severe weather outbreak across the region as a cold front arrives during the late afternoon. A severe thunderstorm produced softball-sized hail in Clare County which smashed skylights, dented automobiles, and damaged roofs and antennas. Damage was estimated at up to half a million dollars

1942: Snowflakes fly across Lower Michigan as temperatures fall to the lower 30s and only rise into the 40s during the day.

2009: A microburst with winds up to 70 mph struck just northeast of Greenville in Montcalm County. About a dozen trees were downed and a travel trailer was tipped over.

1953: Temperatures soared to the 90s across western Michigan. Grand Rapids hit 93 degrees and Muskegon 92 degrees, both record highs and records for the latest date of a 90-degree reading.

1967: Wet snowflakes fell at Grand Rapids and Lansing. The high of 42 degrees at Lansing is the coldest high temperature for the month of September.

1986: A severe weather outbreak produces high winds, large hail and two tornadoes across Lower Michigan. One person was injured in Van Buren County as a tornado hit near Mattawan. Six houses were destroyed by a tornado near Rankin in Genesee County.

2006: Several waterspouts were observed on Lake Michigan. One was about 5 miles offshore of Holland, while another was sighted just offshore of Saugatuck. This waterspout approached the coast and may have come onshore, but no damage was noted.

1899: September ended on a very cool note with a record low of 21 degrees at Lansing and afternoon highs only in the 40s. The high of 44 degrees at Muskegon made for the coldest September maximum temperature on record there.

1897: Temperatures reach record highs with both Lansing and Grand Rapids hitting 89 degrees. It is the highest temperature ever recorded in October at Grand Rapids.

1974: Cloudy and cold weather prevails with high temperatures in the 40s and snowflakes observed at Muskegon.

On September 25, 2007, thunderstorms ended a dry eight-day stretch of well above average temperatures in the upper 70s to upper 80s. Some of the storms were severe with the most damage occurring in Flushing. A downburst produced an estimated 80 mph wind gust which blew in garage doors and down hundreds of trees and large limbs.

Also on September 25, 1941, the remnants of a former Category 3 hurricane passed over Detroit. What was remarkable about the remnants of this storm was the high wind speeds and low pressure that accompanied it. Wind speeds remained steady at 56mph with wind gusts of up to 75mph! Dozens of people were injured by these winds. The pressure dropped to 990mb that day, which is the second lowest pressure reading ever recorded for Detroit during the month of September.

On September 26, 2017, the temperature reached 93 degrees in Detroit, Flint, and Saginaw all of which are record highs for the date. In Flint and Saginaw, it was the 6th consecutive day of record-setting temperatures in the 90s and the latest such streak (6 days) of 90-degree-days on record for both sites. The 26th is also the latest date in the calendar year that Flint has ever reached or exceeded 90 degrees.

On September 27, 1998, Flint experienced a record warm temperature of 86 degrees for the day.

On September 28, 1991, Flint experienced a record low temperature of 26 degrees for the day.

On September 29, 1966, the pressure dropped to 989mb during the passage of an intense early fall low-pressure system. This is the lowest pressure reading ever recorded for Detroit in the month of September.

On September 30, 2002, the very warm and dry month ended with record high temperatures of 86 degrees at both Saginaw and Flint. Flint ended the month with their driest September, 0.29 inches, and Saginaw had its second driest September, 0.39 inches. After an extremely hot and dry July and August, the weather of September 2002 only exasperated drought conditions. During the first half of the month, hundreds of communities across the area were under water restrictions. The hardest hit by the drought was the agricultural industry. September yields across most of the area were estimated at under 50 percent and many counties across eastern Michigan were declared agricultural disaster areas.

On October 1, 1974, the earliest snow was observed with a trace of snowfall in Detroit.

I’m off to Gaylord for the tornado recap gathering tomorrow then off to Alpena on Friday. Looks like some more sunnier warmer temps ahead. Not going to lie it’s been a little chilly imo. Perfect “bowl of chili” weather.

My mom’s friend is on Estero Island (off the shore of Fort Meyers). She is sending us lots of videos, it looks like tropical storm conditions currently. She should be in the sweet spot for storm surge and possibly the strongest winds

Hope everything goes ok there. This thing is borderline Cat. 5

Even Orlando is forecasted to get 80+ mph wind gusts.

Here we go Furnaces will be running till May 2023 … Low 30’s tonight great scotty ….INDY

They will not be running 24 hours a day but they will be running often until at least mid late April.
Slim

Nah grab and extra blanket. Lol. We always see how long we can hold off before turning on the heat. Lol

I ran mine once to just take the chill off the house. It was cold in here.