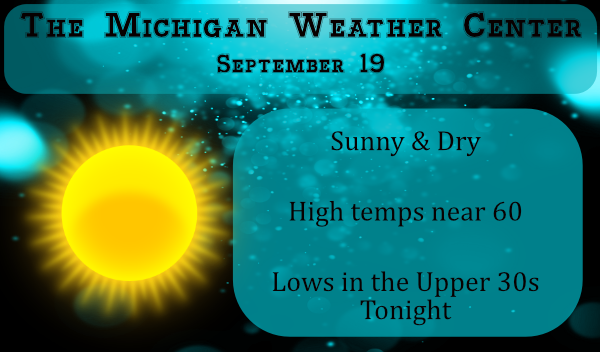 This past week we had a lot of high-level smoke and that made the sky look a pale milky white on several days. It more than likely also held the daytime temperature down.

It went down to 38 here last night. The house feels pretty chilly in the house this morning. It is so nice to see the sun it helps warm it up some. It’s a great day to cut back some of my flowers that are done for the season.

The smell of fall in the air. I like it when the trees just start to turn. Great time of the year !

I had a low of 35 here in Comstock Park last night.

33 here with our first frost of the season. To me, the first frost is the official end of summer – although I’m wearing shorts getting ready to hit Meijer for groceries. Speaking of summer, this was one of the best ones I can remember, IMO. It was never cool and tons and tons of sunshine. Could have used some more precip, but that’s my only complaint. Have a great day all!

The low at both the airport and here at my house of 36 ties the low for any September 19th at Grand Rapids. Here at my house there is frost on the roofs of houses and cars. With some areas of frost on the grass. So while not a killing frost there none the less was some frost. At this time it is sunny and 38 here with some of that frost still visible.
Slim

It looks like MV will need to remind Andy and Mookie not to clutter the blog with repetitive CPC maps that are already avaialbe from his site! Incredible!

34.2 was the low temp for today in Otsego

It appears that mookie has gone off the deep end! We have incredible cold currently! Get used to it!

Lol. Someone doesnt like the facts that when the maps turn RED, they try to spin it.. Lol

Lol!! So much for the short cold spell!