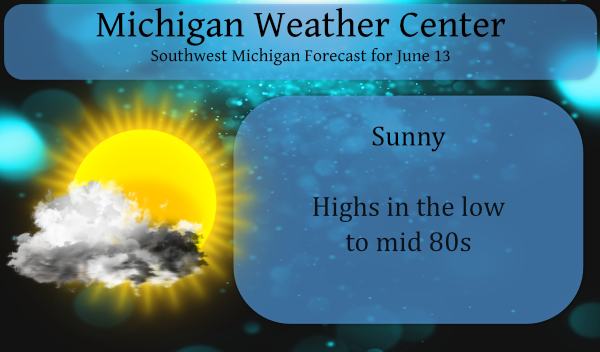 Our dry spell continues in SW Michigan.  Some areas have seen enough rain to help the crops others not so much.  We reached 89° yesterday with no rain.  We did watch some cumulonimbus clouds build to our east as if they were taunting us.

We will be warm once again today however the humidity will be moving out of the area so conditions should be more tolerable.

I have been wondering about the effects of earthquakes and what effect they could have on our weather.  While there hasn’t been a solid determination of the effects of large earthquakes affecting the weather they do move the earths axis and shorten days by small amounts.

The devastating 2011 Tohoku earthquake in northeastern Japan was a record-breaker on many levels. The magnitude-9.0 quake was Japan’s largest recorded and the world’s fourth-biggest earthquake since 1900. Most terribly, it unleashed a 39-meter high tsunami, killing almost 16,000 people and causing a nuclear meltdown at Fukushima Daiichi Nuclear Power Plant.

The earthquake had effects on a global scale. Seismic waves caused icebergs to break off in Antarctica, water in Norwegian fjords to splash back and forth, and wreckage from the tsunami washed up along the North American coastline. Another global consequence? The quake shortened Earth’s day by 1.8 microseconds (µs) and shifted its figure axis by 17 centimeters (cm).

Just to clear things up, our planet wasn’t knocked off its axis by the quake. Instead, the earthquake redistributed Earth’s mass, thus moved the figure axis, around which the world’s mass is balanced. The figure axis is about 10 meters from the north-south axis. In the 2011 earthquake, a huge chunk of the Pacific plate descended beneath the Eurasian plate, so the earth’s mass moved around.

But why would an earthquake speed up Earth’s rotation? Think of a figure skater spinning. As she brings in her arms, she speeds up. Similarly, the 2011 earthquake brought the mass closer to Earth’s center.

This isn’t the first time that an earthquake has affected Earth’s rotation and figure axis. The 2010 magnitude-8.8 Chile earthquake shortened the day by about 1.26 µs and shifted the earth’s figure axis by about 8 cm. And the 2004 magnitude-9.2 Sumatra-Andaman earthquake moved the figure axis by about 7 cm. It also shortened the day by 6.8 µs. These numbers all came from a numerical model of Earth’s spin; however, GPS is making it possible for scientists to measure how Earth’s rotation changes over time.

Three main factors decide how an earthquake will shift rotation. First, earthquakes closer to the equator can have more of an impact on Earth’s spin. Second, the bigger the earthquake, the bigger influence it will have. And finally, the kind of earthquake matters. Strike-slip faults, which produce a lot of horizontal motion and very little vertical motion, will not usually change the length of the day. Thrust faults that push the earth’s crust vertically, however, are more likely to affect Earth’s rotation. It shouldn’t be a surprise that the 2011 Japan, 2010 Chile, and 2004 Sumatra earthquakes were all produced by thrust faults.

Regular people won’t notice the 1.8 µs change; in fact, the day’s length fluctuates pretty often. Anything that redistributes Earth’s mass will alter its rotation. That includes tides, wind patterns, and circulation of the Earth’s liquid outer core. But aerospace engineers have to be precise in their measurements when they’re sending spacecraft to planets such as Jupiter and Mars — if they didn’t take this change into account, they could miss the planet completely.

We should be more concerned about the movement of the earth’s magnetic core which could cause the reversal of the poles and volcanos could spew enough ash into the atmosphere to cool it.

Phew! Back to back 90 degree days!

So longggg heat and humidity winds out of the northwest today bringing down temps in the 70’s and low 80’s with overnight temps in the 50’s as far as the eye can see woo woo!! INDY

The overnight low here 64 the official low at GRR was 65 no rain fell yesterday. After 12 days the mean for the month at Grand Rapids is now at 73.7 that is a departure of +7.3 if this was to carry to the end of the month it would place this June in 3rd place on the warmest all time list. So far this month the official high has been 90 and the low so far has been 46. Last year the mean for June was 69.6 the high for the month was 93 and the low was 42.… Read more »