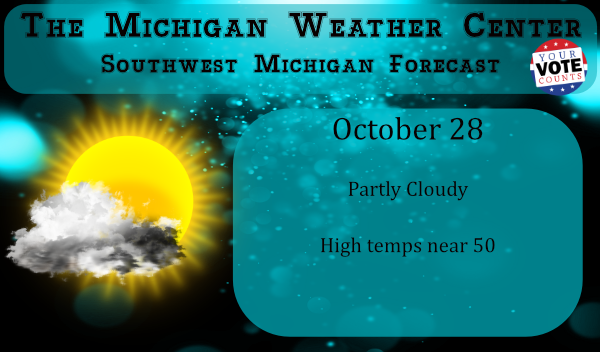 Yesterday was our coolest day since last May 7.  Our high never made 40°, we struggled to 38.1° with mostly cloudy skies and light rain and drizzle.  Didn’t see any snowflakes.  We will begin an overall dry period which should last into next week with temps warming back into the 40s and 50s and we will see appearances of the sun which will be a welcome change.  There is one exception, however:

We may see our first chance of snow showers Sunday with the passage of a strong cold front and strong winds gusting in the 40 to 50 mph range.  We will have to see how this plays out so don’t get overly excited yet.  This will be short-lived as temps warm back up next week to above normal.

1962: Snow accumulates an inch or two across southwest Lower Michigan as an October cold snap continues. Low temperatures fall into the 20s at most locations for four straight days from the 24th to the 27th.

1869: Several inches of snow pile up across southwest Lower Michigan. The 5.5 inches at Lansing is a record for early season snowfall and the high temperature there only reaches 34 degrees.

2008: Thunderstorms combine with a cool air mass to bring some hail to Lower Michigan. Small hail covered the ground in a few locations.

1869: Michigan is in the grip of an icy cold wave. The temperature falls into the teens for eight consecutive days at Lansing, where it is the coldest October on record.

1925: October feels more like December as snow and cold prevail for much of the last half of the month. Measurable snow falls for three consecutive days with high temperatures at or near freezing from October 28th to the 30th.

1988: Record cold temperatures in the teens and lower 20s close out the month. The low of 18 degrees at Grand Rapids on this day ties the record for the coldest ever recorded in October.

1917: One of the coldest Octobers on record ends on a wintry note with about an inch of snow and high temperatures only in the lower 30s.

This is off topic and I will probably post this again tomorrow since I’m posting this late this evening. Okay, since the election is in a matter of days and the polls are all in favor of a Biden win, I have a question or two. It appears it’s a foregone conclusion that Biden will mandate a nationwide lockdown to irradicate the Covid virus. How does the country survive another protracted lockdown? In the spring, the Democrats seemed to be in agreement that the lockdowns should have been extended far longer than what they were. The terrifying part is when… Read more »

Good morning we have a pretty Strong cold front coming through on Saturday night into Sunday morning winds may gust 50mph we could have some power outages lake shore flooding and the possibility of accumulating snow with it I’m thinking west Michigan may see it’s fist winter weather advisors of the season we need to keep a eye on it …INDY.

Around 3PM yesterday when I had the dog out we had snow here. It didn’t last and didn’t amount to anything. Just had it all over my jacket. It melted fast.

I recorded 0.14″ of rain fall yesterday. There was no snow seen here but it was a cold rain. The over night low here was 31 amd there is a lot of frost on the roof tops this morning.
Slim