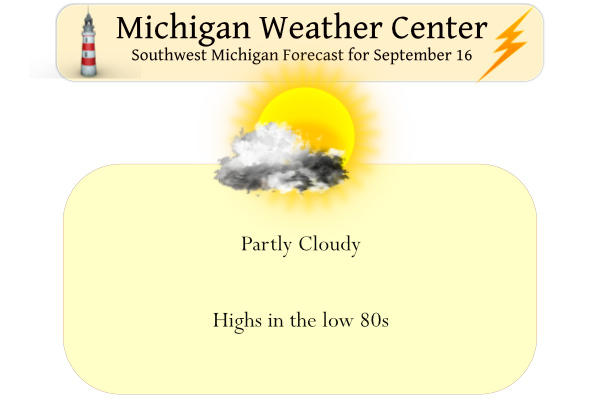 Yesterday was another great day in the weather department with mainly sunny skies.  Our high was 78° and the low was 55°.  This month has been on the dry side thus far with only .59 of an inch of rain in Otsego.

We are in the second half of September and it is time to bring in the thoughts of our first freeze like it or not.  We still have about a month to go before seeing this come into the playing field.  Below are the dates of earliest and latest freeze dates:

Towards the end of next week, we will see a cooling trend coming into the pictures shown in the 8 to 14-day outlook from the CPC:

Get ready, a big cold front is coming thru next week! The near normal temp pattern continues to rock! Incredible!

The sun altitude is down to 49 degrees, the same as March 24th. We are still in the sunnier half of the year… but not much longer.

We will begin to loose daylight at a pretty rapid rate not long from now. Sunset today in Grand Rapids is 7:50. By the 30th of September it’s 7:25. And one month from now it will be 6:58.

Rather hazy and humid out today again with the dew point creeping into the mid 60’s. Not quite the cool, crisp air you’d expect for the second half of September. AC continues to crank.

6 more days of mid Summer like weather? I’ll take it! What a summer it was.

The official H/l at Grand Rapids yesterday was 77/54 there was no rain fall and there was 55% of possible sunshine. The overnight low both here in MBY and at GRR was 58. For today the average H/L has now dropped down to 74/53. The record high for today is 89 in 1906 and 1955. This is the first time the high for the day has not been 90 or better since May 24th The record low for today is 32 in 1902. Most of the next week looks to stay on the warm side until late next week when… Read more »

Interesting that Hollands average first freeze is earlier than GR. Seems with the close proximity to the lake it would be a bit later.