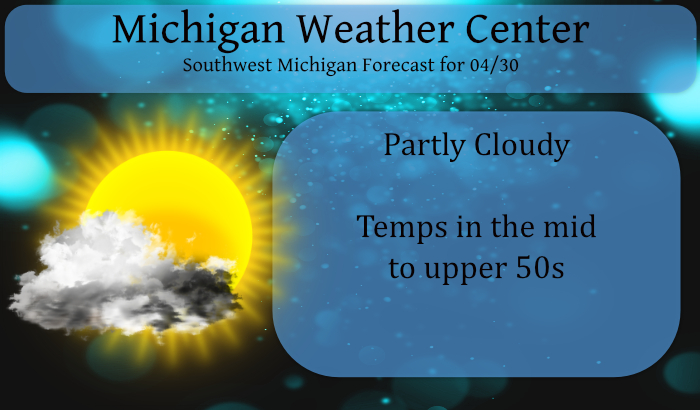 Dry conditions persist across the state with the exception of the western counties of the U.P..  Here in Otsego, we have had 1.24 inches of rain for the month of April and 3.15 inches for March and April combined.  There are a few showers moving through this morning which will not amount to much.  The lack of soaking rains this spring and below-normal snowfall this winter has caused a persistent drought in the state and a good portion of the U.S. continues to have drought conditions. 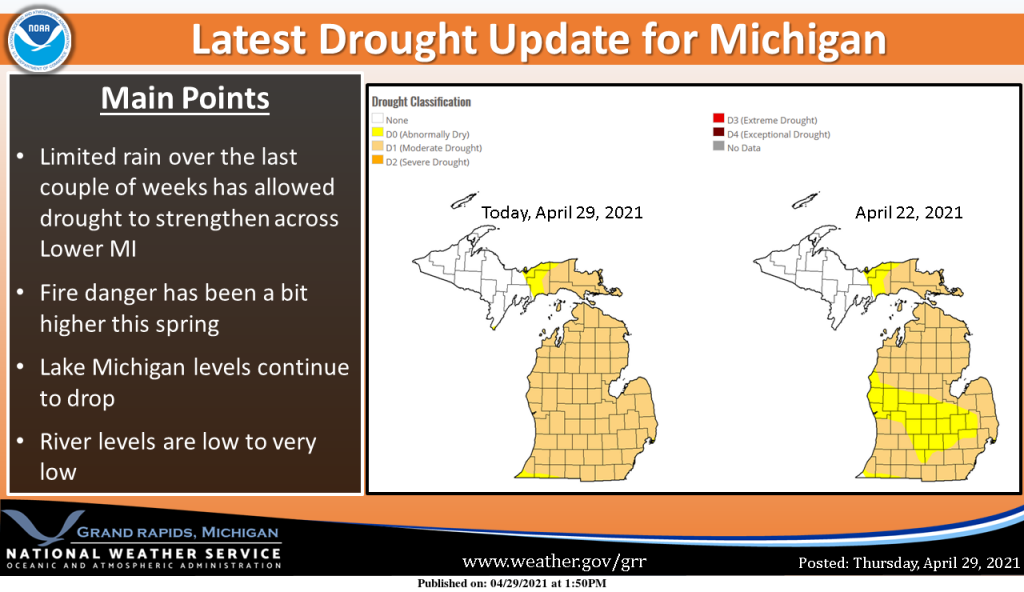 In the Midwest, a half-inch of precipitation fell along the Ohio and Mid-Mississippi Rivers, parts of northern Ohio and Indiana, and central Minnesota to Upper Michigan. Parts of far northern Wisconsin had an inch or more. But much of the Ohio Valley states, and Iowa to Lower Michigan, had little to no precipitation this week. Streamflow, soil moisture, and 1- to 2-month SPI indicators prompted the expansion of D0 in Illinois, Indiana, and Ohio, while D1 expanded in northern parts of Indiana and Illinois, across southern Wisconsin, into southeast Minnesota and northeast Iowa where deficits were mounting as seen in 1- to 4-month SPI values. D0 also expanded in the latter 3 states. D1 was expanded across Lower Michigan where precipitation deficits over the last 90 days have been building, streams are low, and soil moisture continues to dry. USDA statistics show 30% of the state is experiencing topsoil moisture that is short to very short (dry to very dry), an increase of 17% over the last week. The statistics increased to 34% in Iowa, 25% in Minnesota, and 21% in Wisconsin.

Our next best chance of rain comes Monday night into Tuesday (or so our best computer guesses say).  The last rain models over this week have failed miserably so we will have to see how this all plays out.  CPC guesses for May give us a 43% chance of above-normal rain.

Looking forward to our Texas trip coming up soon! Gonna get some fantastic WARMTH down there!

Wow it sure was a cold back half of April and now May is starting out windy with no 70’s in sight! Quite a cool pattern we are entrenched in! Incredible!

A warm March and a warm April. Does it get any better?

46* degrees in my area beautiful last day of April so above normal right lol … Have a good weekend!! INDY.

Another full week of colder than average temps on the way. Welcome to the description of Summer 21.

Boy, if we don’t get some decent rain soon that map is going to move to severe drought. I can’t remember a Spring this dry before. Very little snow so no moisture in the ground to start with, and now no rain other than spits and sputters.

Weather wise yesterday evening couldn’t have been better for the opening of our red league softball. 60 degrees, sun, and no wind. Wish we could get that playing weather all Summer. Not much fun playing when it’s 90 out.

What about the snowfall that year? That plays a big part with how much soil moisture there is to start out with. Also I’ve noticed quite a difference this Spring between the rain totals in GR and the totals closer to the lakeshore.

In the December thru April total this year will be the driest since the December 2003 to April 2004 period. The total precipitation from December 2003 thru April 2004 was 8.03″ and from December 2020 thru April the total will be at over 9.37″ That is for Grand Rapids. As for Holland and Muskegon there is some missing data for Holland but it looks like in the past there have been months were there have been less at the lake shore and other months with more. But over all the trends are close to the same.
Slim

The Rockies are rocking with May snow! Rock n roll will never die!

The cool weather continues with no change in sight!

And yet the simple facts completely contradict what you keep posting as yesterday was yet another above average day. As was the day before that. How can this be?? Check it out:

Rocky really needs to go to the eye doctor! If he can’t see that this weekend will have well above normal temps again!! Ten weekends in a row of great golf weather! Who knew?!?!!