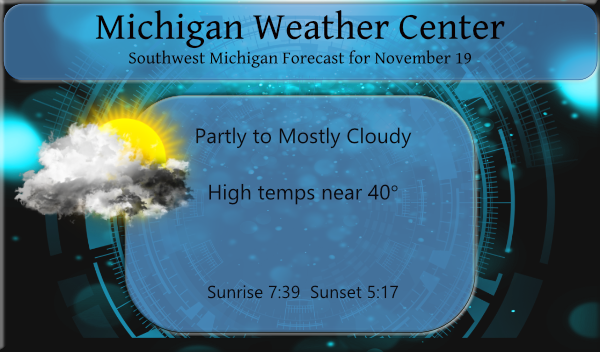 We have half of an inch of snow on the ground this morning with a temp of 31° at 4:30.  Yesterday our high was 42° and the low was 30°.  Our next chance of snow will come in the Sunday night/Monday timeframe.

The CPC released its December outlook yesterday and they are guessing equal chances of above/normal/below normal temps and above-normal precip.  my guess would be near normal temps for the month.

I am setting up a new computer system today and tomorrow, this site should remain the same, it is mainly a matter of massive file shuffling and upgrades.

I missed the lunar eclipse this morning, but the moon was huge and gorgeous over the western horizon this morning at 5:30 am. Just returned from ataking the dog for a walk. It is a beautiful, sunny day.

Here at my house I recorded a half inch of snow fall yesterday. The official amount at GRR was 1.7″ At this time the ground is white but the roads are not. For the month of November Grand Rapids now has a mean of 41.8 that is a departure of -0.4 and so far this month the official snow fall amount is now at 3.4″
Slim

Below normal temps in November and now the outlook for December is looking great for snow chances! Who would have thought? It is going to be a wild winter! Rock n roll will live forever!