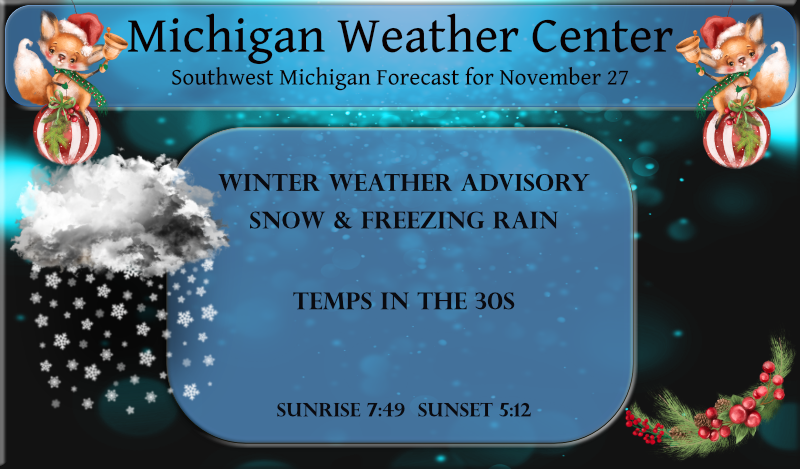 You may hate it or love it but either way we are now about to enter meteorological winter. Of course, the months of December, January and February are the coldest months of the year here in west Michigan. In most winters they are the months with the most snow fall. Records have been kept here at Grand Rapids since 1892 in the years 1892 to 1895 there is some missing data. The location from were records were taken from appears to have moved 3 times. For a location somewhere downtown to the old airport between 36th and 44th streets near Kalamazoo ave. That airport opened  in 1927 but not sure when the weather station moved there. And since November 23rd, 1963 the official NWS office moved to its current location.

Snowfall total is 2.4 inches and it looks like the middle of winter outside! Fantastic!

The Christmas lights look so pretty with the snow.. 🙂

Congregations to MICHIGAN in their big win over ohio state. There is just under one inch of new snow on the ground here and the roads are snow-covered and slippery. The current temperature is 30 here with light snow falling. We were on the south side of town doing some shopping and there is more snow here than is the Rivertown Mall area in SW GR.
Slim

Looks like we now have an inch of snow. Grass is not covered. Roads are messy.

That was the most impressive U of M win I have ever seen!

Got a few flurries earlier. Nothing to write home about. Quiet now. Still waiting for our first measurable snow of the season.

Great day for football – college and high school. A couple of the high school finals games have been fantastic.

Well, we see if this trend continues this winter. The heaviest snow band is trending North. We are getting absolutely pounded with moderate snow while areas just Southwest of GR not much! An inch already and climbing! Incredible!

The ground is now covered with about 1/4 inch of snow here. There is some slushy snow on the road and driveway but also not much. Light snow is falling with a temperature of 32.
Slim

It might just be me, but I found the roads to be really slippery on my way home from the gym about 10 minutes ago. I almost slid off the road 2 times. FYI if anyone decides to head out, take it slow!

We are getting pounded with snow and as usual Zeeland is missing most of the snow! I can’t wait till Zeeland gets absolutely hammered with lake effect snow this winter! It is going to be awesome when they get about a foot of snow from a lake effect, lake enhanced event!

Such a great winter Saturday snow fallen and the game Go Blue!! InDY

Will U of M even be competitive? Hopefully they break the total domination that OSU owns over U of M. It something like 17 losses out of the last 19 games! Normally a big rivalry game involves games that are actually competitive!

Light snow just started here. With a temperature of 29 it is already staying on the grass, driveway and the road.
Slim

Check out the 10 day snow map! Skiing here I come!

The clipper is looking great! Bring it!

Yes it will snow in Zeeland and I can hear it now, only an inch or two of snow and it is melting, not a storm! Delusion on full display!

A WWA and plenty of snow potential after that! Incredible start to winter!

What a WWA? Who knew?