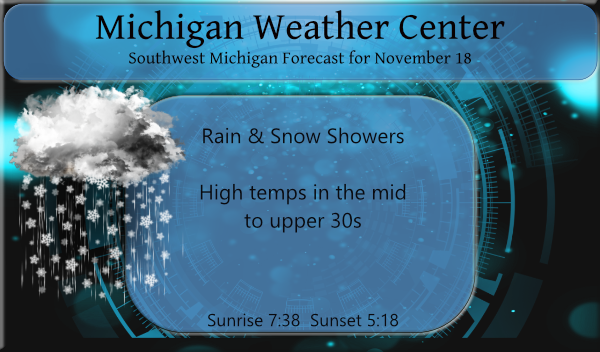 It will be colder today with highs in the 30s and gusty winds making it feel colder. Lake effect snow showers will develop by this afternoon and continue tonight with some accumulations around an inch or two along and west of a line from Grand Rapids to Kalamazoo (the 131 corridor).  Another shot of cold air and lake effect could come late Monday into Tuesday of next week.

Looking at the latest snow cover maps there is snow on the ground mainly above the 45 parallel with the exception of western Europe.  The Hudson Bay remains mainly ice-free as are the areas around and south of Greenland.

We have been getting hammered with snow this evening! It is great to see all white on the ground! Just a sign of things to come! I love it!

It is cold outside and that wind goes right thru you.

lol!! I am sure they have snow too.

The Christmas lights will look so pretty with the snow. I will say though it was different seeing the snow blowing across the road when I was driving. The closer I got to home the more snow was falling.

Yes …Its a winter wonderland outside…InDY

Loving the December feel outside winds gusty with temps in the 30’s wind chill in the 20’s ohhh and snow flurries fallen who knew??? InDY …

Breaking new>>>>we will end up with another month of below normal temps in November! Incredible!

very light snow falling here with a temperature of 35.
Slim

And with just over a month to go in 2021, it looks like it will end up as another warm year. I believe that makes 4 or 5 warm years in a row!

It’s looking like a warm December is starting to be the consensus. Another short winter this year? It already looks like we will probably escape November without much snow.

While Novembers don’t average a lot of snow, we have had some very snowy Novembers in the past.

Get ready for the snow today, tonight, this weekend, this month and all winter! It is going to be a wild ride and I don’t understand why anyone living in West Mi would not look forward to multiple snowstorms! Bring it on!

WWMT Ch 3 Kalamazoo has put out their winter snowfall guess and you can see it on this link.
https://wwmt.com/news/local/weather-alert-network-holds-winter-weather-special-on-2021-22-snow-predications
In the Video they have some snow fall total from the last 6 years at their Kalamazoo station office. Kalamazoo is one of the locations that the NWS doesn’t keep official snowfall records. Now the station claims the average snow fall for Kalamazoo is around 65” The current 30 year average snow fall for Grand Rapids is 77.6” and for Muskegon it is 87.2” anyway if you get a chance look at their video for their winter guess.
Slim

It was a mild and wet day here yesterday with a high 58 and here at my house 0.66″ of rain fall. The overnight low here at my house was 36 and that is the current temperature with cloudy skies. It is somewhat breezy so that will make that 36 feel colder. So far November 2021 at Grand Rapids the mean of 42.1 is just -0.3 and there officially has been 1.50″ of precipitation and a total of 1.7″ of snow fall. All is all a rather typical November. The updated CPC long range guess will be issued later today… Read more »

I would say this has been one of the most normal Novembers you can get in Michigan, aside from the extremely late leaf color.
Also some random good news: we start to gain sunlight in the evening in about 3 weeks!

Thanks goodness for that. The one thing I really dislike about this time of year is the lack of daylight.

I agree, now that I am vaccinated against covid and the flu I feel comfortable going in public. So I typically run at 5PM and then go to the gym 6:15-8, which keeps me busy this time of year. Much better than last year!

Great job getting vaccinated, now if only the rest of the ignorant people in this country would follow your awesome example, we would not be running out of hospital beds! Keep up the good work and get your booster shot, as soon as you are eligible! Fantastic!

It appears that the grass has finally stopped growing. Now if I can get the rest of the leaves to fall from our trees, I can prepare for winter.

I have one tree that still has almost all of its leaves still on it. Its like it is afraid to let them go.
Slim