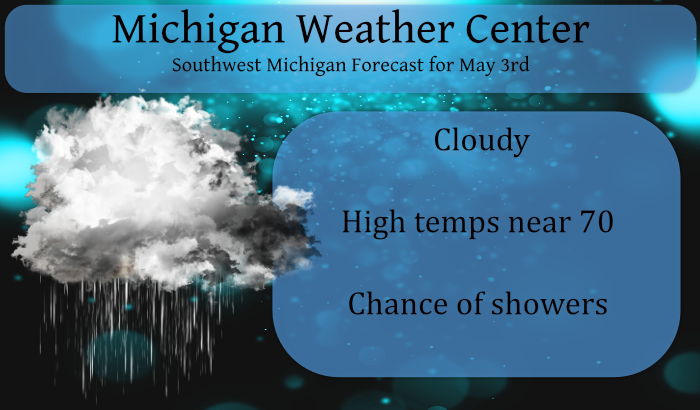 Sure was a warm one yesterday.  We had a high temp of a very unseasonal 84° here in Otsego.  Today will be more tolerable with highs around 70° with scattered rain showers.  We received .11 of an inch of rain this morning by 6 am with hopes of more on the way.

The dogs and cats pretty much just lay around yesterday they weren’t their usual playful selves.  I don’t have the air conditioning on yet, I generally try to wait until closer to Memorial Day.  I lived without air conditioning for the first 40 years of my life and I somehow survived.  Being in my 60s now I look at it as a thing of comfort for both man and beast.

We will see cooler temps this week – Weak weather systems will create a daily risk of showers through midweek, but unfortunately, most areas will see only light rainfall amounts. High temperatures on Monday will be around 70, then between 55 and 60 for the rest of the week.

This is the SPC forecast for today – we are under the general thunderstorm outlook with the marginal nosing into the SW corner of the state.

Nice warm up, right in time for when I get back from Vacation!!

Chief Bill Steffens just said 50’s as far as the eye can see cooler pattern setting up for May standards otherwise look for mookie on vacation berrys air compressor running on high and Jeff letting us know 80s are coming in June DDDDDD lol…..INDY

I love it! Rock on INDY! Clearly we are entrenched in a cool pattern! Who would have thought!

Heck yeah, bring on highs in the 30’s through the middle of the month here!! We’ll be on vacation down in sunny warm Texas!! BRING IT!!

No ac will be needed until at least June!

Don’t put your snow shovel away!! Could get a few inches Friday night!

I might need to break out the skis again!

This is from todays NWS discussion ” WHILE THIS MAY NOT BE NOTICED MY MANY, THE MJO IS 3 STANDARD DEVIATIONS FROM NORMAL AND IN QUAD 1. THIS IS A STRONG COLD SIGNAL FOR MICHIGAN. IT IS FORECAST TO PROGRESS INTO QUAD 2 BY EARLY NEXT WEEK, BUT GUESS WHAT, QUAD 2 IS COLD FOR US TOO. IT HAS BEEN MY EXPERIENCE THAT IF THE MODELS DO NOT MATCH THE MJO FORECAST, THE MODELS WILL BE WRONG. THE BOTTOM LINE IS EXPECT AT LEAST 2 WEEKS OF COLDER THAN NORMAL TEMPERATURES. THIS MEANS FROST AND FREEZING TEMPERATURES ARE MORE THAN… Read more »

I expect the entire month of May to trend towards below normal for temps! Get prepared now. No warm air is in sight! Forget 80’s, forget 70’s and embrace night time temps in the 30’s! Incredible!

Glad I haven’t put any seed down yet I guess it’s time to get a new furnace filter good thing the stores sell them.year around WOW!! INDY

You will need your furnace all month long!

Heck yeah!! Texas will be amazing during that time!! Maybe Rocky will get a few inches of snow while I’m gone!! Who knew?!?!!

We had the AC on here too. I hate to say it but it was the 2nd time. It gets really hot in here too. Yesterday we decided it was a great day to give the dog a bath. I am not sure the dog did. All my plants are loving the warmer weather. I got my patio tomato plants but haven’t re planted them just yet. Last year was a bumper crop of tomatoes I am hoping for the same this year.

Looks like there is a good chance that you may not need the AC for a while. I have not uncovered the AC yet and see no reason to do so for the next two weeks or more.
Slim

You are right. I just read what you posted about it being colder for 2 weeks. That is why all my flowers and plants are still in the smaller pots. Much easier to move around.

Yes it was hot and stuffy in the bedrooms last night. Definitely needed the AC. Probably be on tonight as well with the dew point into the 60’s.

Average high temps in March are low 40’s. Current temp now 63 degrees with a humid dew point of 60. Yup. Feels like May.

Yesterday was once again one of this springs extremes. The official high of 83 is now the 2nd warmest for any May 2nd at Grand Rapids and the low of 65 is now the warmest minimum for any May 2nd It was all in all a genuinely nice and warm spring day. At this time there is light rain falling here at my house but so far just 0.04” has fallen. With that light rain it is now 60 here and the last reading was 58 at GRR.
Slim

More records fall. Probably to hard to look up, but what would your guess be on the average number of days a year that end up + or – 20? Can’t be very many.

Thanks Slim for the facts again as always …INDY

Yeah I can see where January would be prone for more days with a 20 degree departure, but I would think other months, especially May through August it doesn’t happen very often. A + 20 in July would give us temps of 105 degrees!

WOOD forecasted 72, 79 for this weekend and it turned out 75, 83. Why do they constantly forecast too cold almost every time?

I love early summer weekends at the beginning of May! +20 degrees above average on Sunday? Wow!

With yesterday’s high at +18 and the low at +22 it was one of those rare days where the average was a +20 on the day. Don’t see that very often at all! Wife turned the upstairs AC on so we could sleep comfortably.

Same here. We had all the windows open yesterday, which was great. However, we could not get the house to cool down last night and it was very uncomfortable. We shut up the house and turned on the a/c.

Getting some much needed rain this morning, but just not much of it, unfortunately.

Have a great week, friends!