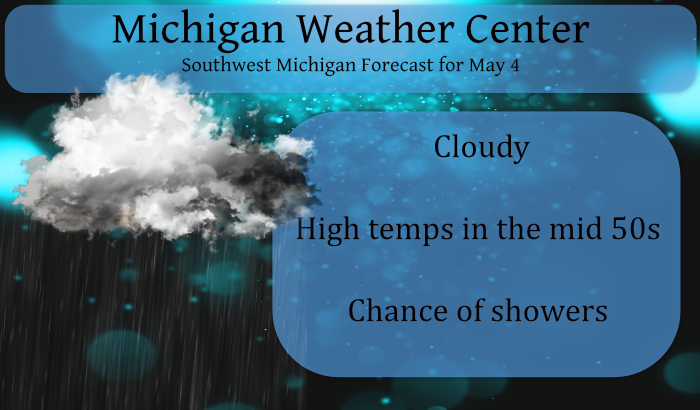 We have had a fairly dry spring this year so far.  The latest CPC forecast has us cooler and wetter than normal for the next couple of weeks which would hopefully make a dent in our rainfall deficit. Unfortunately with the cooler than normal temps we have chances of freezes and frost in the picture. Normal highs would be in the low to mid-60s normal minimums would be in the low to mid-40s.  Forecast models have us in the 50s this week into next.

Last night’s rain didn’t amount to much, just another .01 of an inch to add to the .14 we had yesterday.  With the CPC forecast put aside, I see perhaps a dryer pattern with the Gulf moisture conveyor belt shut down during periods of cooler than normal temps, something to keep in mind as most of the moisture would come from the west and north.  Let’s hope the CPC sees something I don’t in regards to rain.

52* degrees out in my area well below average how exciting is that and ahhhh refreshing it is!! WHO KNEW?? INDY

The new climate normals were just released. If anyone has any helpful links let me know, it will be interesting to look at the data!

Yes, that will make for an interesting read!

May…nothing more than another month of Winter.

Shhhhh don’t day that to loud lol…. Currently 52* degrees outside in my area feels fabulous!! INDY

Thanks for the facts and yes May usually has many cold days and this May will be no different! In FACT, WE SURLY ARE HEADED FOR A BELOW NORMAL TEMP MONTH! Bring it!

So much excitement over temps in the 50’s and 60’s. I’ve been saying for years these are the absolute perfect temps. You can work all day without feeling burned out.

Incredible streach of below normal temps ahead keep the hoodies on stand by wow. Mid 30’s and low 40’s for lows best fire Weather ever ever …..INDY

Just 0.04” of rain last night here. All we can seem to get is a few hundredths at a time. Might be one of those Summers where we’ll need to use the sprinklers nonstop.

Wow, we have started +8.8 degrees for May after a warm March and April. I love it!

I recorded just 0.07″ of rain for yesterday and overnight. So all in all not much in the way of rain fall. Even with the little rain we have had this spring the grass is still nice and green at this time. If it stay dry that will not be the case. The official high for today looks to have been 62 and that was at 1AM. At this time it is cloudy here and 48. With highs for the next several days in the mid to upper 50’s it will be about 10° below average. The average hH/L for… Read more »

Let’s start keeping track of how many below average days in a roll this May we will go why not!! 1 ….INDY

Yes we are clearly entrenched in a cool pattern! Multiple below normal days in a roll will be rocking!

High temps in the 50’s all week! Incredible!