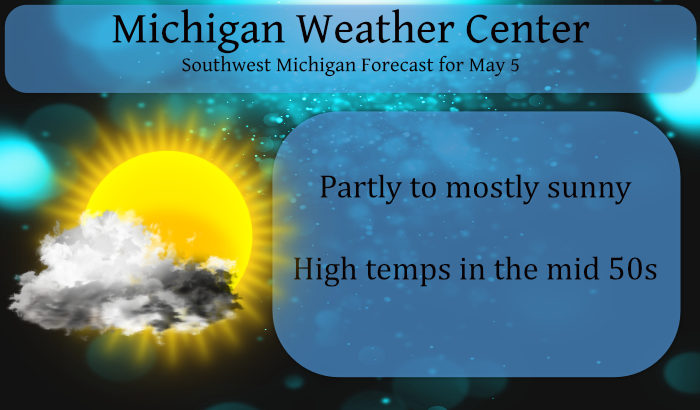 Tomorrow I will have info on the new climate normals for the next 30 years, stay tuned.

1929: A snowstorm puts down a slushy coating of 2 to 3 inches of snow across southwest Lower Michigan.

1930: Grand Rapids was struck by a tornado that moved through the factory district on the south part of the city. Four people were injured as many buildings were unroofed. Damage totaled over a million dollars.

1954: Snow falls on three straight days from the 3rd to the 5th across Lower Michigan. Record snowfall on this date includes the 1.3 inches at Grand Rapids.

1959: Muskegon sets a record high of 82 degrees during a string of five straight days over 80 degrees.

1947: Cold and snow prevail across Lower Michigan with lows in the upper 20s and highs only in the upper 30s to lower 40s.

1974: Temperatures tumble as cold high pressure builds into Lower Michigan. Record lows on this date include 22 degrees at Lansing, 25 at Grand Rapids and 27 at Muskegon.

1880: A tornado destroyed two homes and a barn two miles east of Kalamazoo. No one was injured.

On May 2, 2015, this day in geologic history featured a 4.2M earthquake that was felt in several states. The epicenter was 5 miles south of the town of Galesburg in Southwest Lower Michigan. It was the 2nd strongest earthquake on record in Michigan behind a 4.6M near Kalamazoo in 1947.

On May 3, 2012, a severe thunderstorm outbreak resulted in numerous reports of wind damage, including a small plane being flipped over at Bishop International Airport in Flint. Heavy rain and thunderstorms lasted well into the evening hours and dropped 2.39″ of rain on the city, making in the highest daily rainfall total that Flint had ever recorded in the month of May…until the next morning when continuing heavy rains dumped another 3.23″.

On May 4, 2012, 3.23″ of rain fell in the predawn hours, making it the wettest day that Flint has ever recorded in May. Unfortunately for many Flint residents, the previous record was set only hours earlier on the night of May 3rd. The storm total rainfall of 5.62″ inundated the Flint area. The severe flooding that ensued prompted firefighters to use to boats to help residents from their homes and resulted in localized evacuations and a shutdown of a stretch of Interstate 75, which was reported to be submerged by 4 feet of floodwater. The heavy rain also caused the Swartz River in Flint to rise to a record stage of 9.76 feet.

On May 4, 1902, 2.36 inches of rainfall fell in Saginaw, which is the greatest amount of precipitation recorded for the month of May in Saginaw.

On May 5, 2003, an F1 tornado hit outside of Leonard in Oakland County. There were also many reports of hail ranging from 0.75 inches to 0.88 inches throughout the cities of Linden, Flint, Fenton, Grand Blanc, Thetford Center, Burton and Davison. Some of these places also reported wind from 70 to 75 mph.

On May 8, 1964, an F4 tornado moved through Chesterfield Township in southern Macomb County, touching down at 4:59 pm. This tornado touched down north of Mt. Clemens and moved across Chesterfield Township near the Lake St. Clair shoreline before entering Lake St. Clair southwest of New Baltimore. This was the strongest tornado to ever hit Macomb County and was responsible for 13 fatalities.

Get ready for some incredible May cold! Frost and freeze warnings are imminent this week! Wow!!

Just another stunningly perfect day again with all sun and temps around 60 degrees. We have had a lot of bright days the past several months!

Bills posting outlooks for next Winter already. He sums it up with “ we’re not looking at an exceptionally snowy or cold winter in 2021-22.”
Let’s go for a 3-peat on Winters with barely any snow!

Oh I agree completely. If one is to make a guess you’re just as well off to assume recent patterns of the past couple years will continue until something big breaks it up.

51* degrees in my area it’s another below average May day love it!!! INDY

At this time it is cloudy and 46 here.
Slim

The new 30 year averages are now out. This time there is also a new 15 year average to compare for more recent times.
https://www.ncei.noaa.gov/products/us-climate-normals
Here at Grand Rapids the annual mean went up from 49.1 to 49.3 The new annual snow fall at Grand Rapids is now 77.6″ up from the old 74.9″ The total precip went up from 38.27 to 39.40. While most months went up in temperature not all did as February, April and November went down.
Slim

Also the monthly snow totals changed a bit. Looks like December is much warmer and less snowy, while February is much colder and snowier. This is a trend I have noticed.

And by “much warmer/colder” I mean 1-2 degrees, which is significant… especially in the winter when averages hover around freezing.