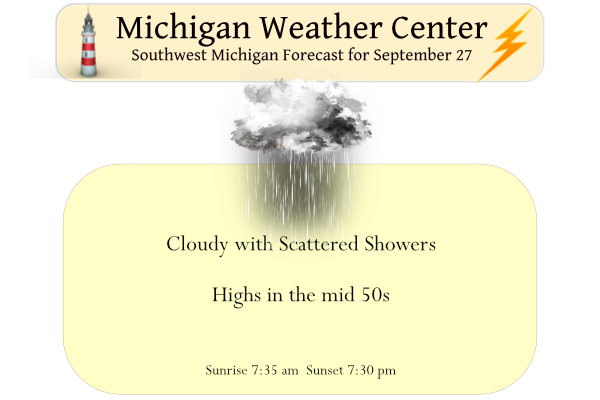 Yesterday we had a high of 55° and the low was 49°.  Our rainfall was .75 of an inch which brings our total for the month to 2.13 inches.  We expect another day similar to today though rainfall totals should be less than yesterday.  Tomorrow night we could see a widespread frost event as temperatures dip into the 30s with calm winds.  I suspect we will see frost advisories across southwest Michigan and warnings to the north.

Got a text from Family in Florida… Jim Cantore is in town… Yikes!!!

What part of FL?

What a cold day! The below normal temp pattern shows no sign of letting up! At least the sun will reappear by Thursday! Incredible cold!

Check out the lake effect rain pretty cool soon it will be snow …. currently 49 degrees out in my hood .. INDY

Lots of sun this morning. Hoping it dries things out. I really need to mow.

My family and their friends finally left Anna Maria yesterday afternoon. I would have left earlier. They’re not messing around, though. They were going to stay at a friend’s farther inland, but they decided to go to Valdosta, GA. Wise decision. Two of the couples are waiting until this morning to hit the road. Not a wise decision. I-4 is a parking lot. The latest cone has Anna Maria and Tampa Bay in the bullseye with a possible Cat 3 at landfall, as opposed to a Cat 1 as forecasted 24 hours ago.