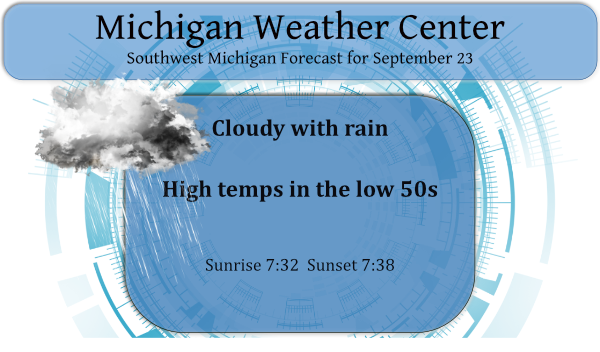 We saw three or four briefs peaks of the sun yesterday though it didn’t warm up the air much.  Our high temp was 58.5° and the low was 52.5°.  Yesterday was mainly dry with the exception of some early morning showers and then the rain moving back in again after midnight.  Rainfall total this morning a 6 am was .75 with the western portion of the low-pressure center overhead.

We expect the showers to remain a good portion of the day with another half to three-quarters of an inch possible. Temps aren’t going to budge much and will struggle to reach the low 50s.  North northwest winds 13 to 18 mph, with gusts as high as 26 mph will add to the mix.

Bring on some above normal temps right into mid October! Raise up the lake MI temps and then when the polar vortex hits the lake effect could be record breaking! Wow! Bring on the snow!

Very glad we are only getting a two day cool down!! After today great warmer weather for as far as the eye can see!

CPC Actually looks like these high temps may need to get bumped up a bit for this forecast! Gotta love 70’s right on thru October! Keep the warm weather ROCKIN!!

Routine…”The Southern Arctic” celebrating the coldest temps in the US today.

Wow up to 47* degrees outside we are getting there lol….INDY

We look to enter an average to above-average pattern temperature-wise after the next couple of days. Average highs fall from 70 today to 66 by the 30th, so even though forecasted highs are around 68 8-days out, that is technically above average for then, even though that would be below average today.

What an incredible sunset last night! Looked like the whole sky was on fire. Of course the pic doesn’t look near as good as the real thing.

Beautiful photo. Thanks for sharing. I saw it last night but didn’t get a photo.

I recorded 0.85″ of rain fall here at my house. The official rain fall at GRR looks to be around 1.18″ The overnight low both here and at GRR was 47 and at this time it is a cool and wet 47. Yesterdays high at Grand Rapids of 60 was the 14th coolest high for any September 22. The forecast high for today is 52 and if that plays out that would be the 2nd coldest high ever for September 23 at Grand Rapids.
Slim