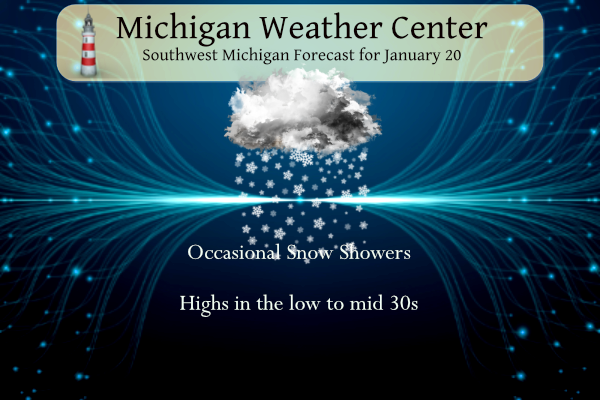 We lost another great musician yesterday, David Crosby, a folk-rock pioneer and one of the founding members of The Byrds and Crosby, Stills, Nash & Young, has died, he was 81.  He joins Jeff Beck, Fred White from Earth Wind and Fire, and Robbie Bachman from Bachman Turner Overdrive, who are all joined together in that great rock and roll place in heaven this month.  Growing up with all these folks makes me feel old and uneasy about my mortality.

We have some snow falling this morning.  We are not expecting much in the way of accumulation, less than an inch in most areas.

Sure glad we have at least 2 more months of winter weather coming to West MI! Bring it!

27 degrees out in my hood with the wind blowing its a cold January Night.. Lets get some ice making a going ready to get out on the ice and fish away .. INDY

Winter weather is back and will keep rocking for weeks on end! I love it!

Thank God we have 2+ months of cold and snow coming! Bring it!

Sure glad that Thursday storm keeps moving further and further south with every run!!

That’s factually inaccurate. The Euro has moved further NORTH on the latest run more in line with the GFS. Of course not a set in stone track could still move back south or even further north. Also this timing is more Wednesday evening/Night tapering off through the day Thursday at this point

Rock on Kyle and keep the facts rocking! facts are facts!

Getting Closer……..BRING IT AND ROCK ON!!

Looking good for normal temps for March according to the CPC!! That means 40’s and 50’s!!! I can handle one more short month of winter, then HELLO SPRING!!! Already seeing spring clothes out in the stores and staying light later in the evening! Spring is just around the corner!!

lol, looking great for cold and snow for the next 2 months or so! Bring it !

Did anyone see the sun today? It was beautiful!! My dog loved the sun puddles in the house. I was just glad to see it and to turn off the lights. lol!!

Sure did. It made several appearances this afternoon.

Michael good to see you back. I hope you are feeling better. My husband is getting his device(pacemaker/defibrillator) replaced for the 3rd time the end of the month. I know what you mean about the musicians – it makes me realize how old I am getting. I will always love music no matter what age I am.

Prayers for your hubby & you, as well Sandy.

Thank-you. I appreciate them very much.

Ditto. I wish him a speedy recovery.

Lol, so much for long lasting cold! Who knew??

Well the Euro is finally in line more with the GFS now giving us a snowstorm next week. Doesn’t mean it will hold but better to see at least some more agreement

Agreed and I would like a little more to the NW please!

I see that some posters are talking about March. While March is the start of meteorological spring and can be ruled out as a “true” winter month. It is none the less one of the colder months of the year. And calendar winter continues for the 1st 3 weeks. It the month with current longest time since a record snow fall has occurred (36.0″ in 1965 at GR) So the case can be made that we are overdue for a snowy March but hey who knows?
Slim

The last three Marchs in GR have seen less than 3″ of total snowfall on average.

Hard to believe it’s been a month since the snow blower has been touched. Used it 2 times around Christmas and that’s been it. Sure have not gotten much use out of it the past several years.

I’ve only used my snowblower once.

Tip Up Town is still on for this weekend, although nearly all on-ice events have been cancelled. They only have about 5″ of ice, and it’s not great ice either.

There is not a whole lot of snow on the ground at Houghton Lake. They did get some snow yesterday but it was only reported as 0.7″ and there was just a trace on the ground before that. So think of this weekends Tip Up Town as a Tulip festival with no Tulips.
Slim

Funny how some people think winter is almost over, when we still have a solid 2 + months of winter left! Incredible!

The last three Aprils in GR have seen less than 1″ of total snowfall on average and max temps in the 70’s and 80’s. So no, big snow is rare in April in GR.

The last three Marchs in GR have seen less than 3″ of total snowfall on average. I would not call March a “winter month” in Grand Rapids.

NwS is calling for 1-3 inches of snow on Sunday possibly 4 inches for all of lower Michigan that will put us over 70 inches for the Winter season ..INDY

Believe it or not, we likely have only about 3.5 weeks of true winter left. With no big snow on the horizon for at least a few more days, it’s more like 3 weeks.

By the back half of February, temps are usually well above freezing and any snow we get is extremely short-lived.

Getting off and on flurries here. The ground was dusted with white about an hour ago, but it has since melted.

Funny how some people call 35 degrees warm! Too funny!

I actually don’t care if it is 10 or 40 in the winter, I just want either the sun or a storm. The current pattern has been very bland. Hopefully the storm on Wednesday pans out 😀

Wow, all models and trends are for colder and snowier the rest of winter! Who would have thought? Incredible!

Anyone else having issues with loading the GFS computer model run? The 06Z run has only loaded to 120 hours. Should be in by now. There was issues loading the 00Z run last night. It was coming in very “spotty”

There have been issues loading forecasts and model runs this morning – seems they are slowly coming back online.

Good to see you back Michael. Hope all is well.

Looks like we may still get a little bit of snow around the Sunday timeframe. The Wednesday system is still uncertain which is expected. The GFS seems to be holding strong and consistent in a track. The Euro is further SE but did bump NW a bit but still not a direct hit.

Michael, glad to see you’re back. Hope everything went well for you.
Yes, losing people does really make you think about your own life and the time you have left here. This week losing someone losing someone in their 50s and and 80s. I was going through cards from loved ones we have lost…makes me miss those people and their love even more, especially with anniversaries of their deaths upon our family coming up.
The snow is making things look pretty, but sure could use a little sun. Even our solar lights won’t turn on because of no sun.
Take care of yourself!!!!

34 trillion gallons of water fell in California during the past three weeks. That’s enough to cover the entire state of California in one foot of water. That’s a LOT of H2O.

Good morning , welcome back Michael. West Michigan now has had 23 days in a row of above average temperatures. There has not been a day with the high colder than 32 since December 28th While there was 1 day with a reported 1’ of snow on the ground at GRR, here at my house there has not been a day with more than a trace on the ground since December 29th.
Slim

The official H/L at Grand Rapids yesterday was 42/34 there was 0.35” of rain fall and a trace of snow fall. There was no sunshine yesterday. For today the average H/L is 31/18 the record was a warm 64 way back in 1906 the record low was -15 in 1984 the record snow all of 6.8” fell in 1963. The overnight low and current temperature so far is 33 and at this time there is light snow falling and there is a trace of snow on the tops of cars here in my area. At this time there looks to… Read more »

It’ll be interesting to see the cloud cover stats once the month ends. We must be near record cloudy for the month (although January is typically cloudy, so maybe not)

Fun fact: he is the biological father of two of Melissa Etheridge’s kids. I wonder if they’re into music at all?

James Crosby has the band Crosby, Pevar, and Raymond

Just breezed through a couple of their tracks on Spotify. Good stuff.