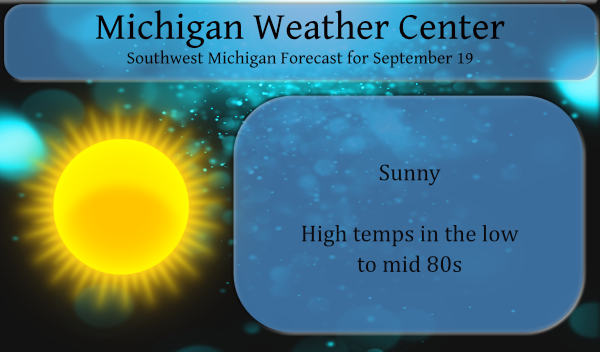 We have enjoyed a long summer with warm temps and lots of dry and sunny days.  The autumnal equinox begins this week on the 22nd and our weather pattern will cooperate with temps dropping into the 60s, which after sweltering in the 80s for so long this will feel cold to some.

This is the seven-day QPF (rain) forecast for this week which is guessing one to three inches.  We have had only .16 of rain here in Otsego thus far for September so this will be welcome.  I am building a shed in my back yard so I hope to get a roof on it before the rain starts tomorrow.

Yesterday’s high temp was 80° and the low was 61°.  Today many areas in SW Michigan will see temps in the mid-80s.

I have been enjoying the high pressure. Cool mornings. Warm afternoons. Dry air. It will be very warm this afternoon with the high temp 10 or more degrees above average.

I am sad to say that it looks like the end of summer is just around the corner. I am not a great fan of the cold and snow of winter and I would much preferer if it could stay warm all year long. Note I said warm not hot. But the fact is we live about half way between the north pole and the equator so we have to put up with large swings in out weather over the course of a year.
Slim

Bring on the cold front! This will put us another week closer to winter! The best season in MI! Rock n roll will never die!