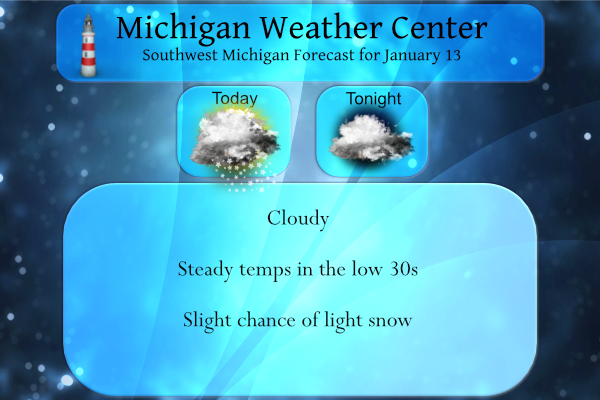 I guess we could call this a January thaw and most certainly a continuation of our boring weather pattern.  Mainly Cloudy skies are expected today. There could be a few sprinkles or flurries around, not much to speak of. High temperatures today will range from 30 to 35 degrees for most locations in Southwest Lower Michigan. Colder air is on the way for the end of the week but not much in the way of snowfall.

Loving the above snowfall and the
below temps is it January?? who knew?? DDDD InDY….

I suppose this is a good time to visit Miami. I am enjoying the sun and thankful for being able to travel and get time off work.
I’ll be back next Tuesday… hopefully the weather is more exciting by then. I hear a possible cold outbreak could arrive later in the month. Which seems pretty typical for Michigan that time of year.

So all that stuff out west is going to go south of us?

To the south through the Tennessee Valley and then back up to our East. Not sure the last time a major winter storm took that route.

Yes very weird. It is weird to see all the colors out west and we aren’t going to get any… Lol. Thanks everyone!!!

I will try to put into perspective a little different as to the climate of Michigan. Here in Michigan, we are between a Continental and Temperate climate. That is because Michigan latitude is between 41°41′ N to 48°18′ N. Being on the borderline we swing between the two. The Continental have warm to cool summers and very cold winters. In the winter, this zone can experience snowstorms, strong winds, and very cold temperatures—sometimes falling below -22°F (-30°C) think areas to the north of Grand Rapids. and the Temperate zone. In this zone, there are typically warm and humid summers with… Read more »

Snow on the ground and below normal temps since December 27th love the sounds of that Winter weather woo woo. ….InDY..

Except for yesterday which was 10 degrees above average. Above today again as well.

It is boring. The temp has remained above freezing the past 24 hours. The streets in our neighborhood are clear and no longer an icy, chunky mess. Grass is now visible through the snow.

I kind of disagree with the definition of winter written on here yesterday. To me, it doesn’t feel like winter if it’s not cold or we’re not getting any snow. Of course, this definition is winter is strictly for those of us in West Michigan. Each region has a different definition of winter.

I understand what you’re saying. To me, winter is just one of the four season is more of a chronological thing rather than a weather thing.

The winter doldrums will continue here for the next week or so if not more. Here in Michigan we are just in the wrong place for any snow at this time. There will be snow to the west of us and a lot of snow to the east of us but not for us. The overnight low here and the official low at GRR was just 31 and at this time it is cloudy and 31 here.
Slim

Nothing on the horizon for at least another 5 or 6 days? I love it!

Wake me up when it gets interesting. ZZZ