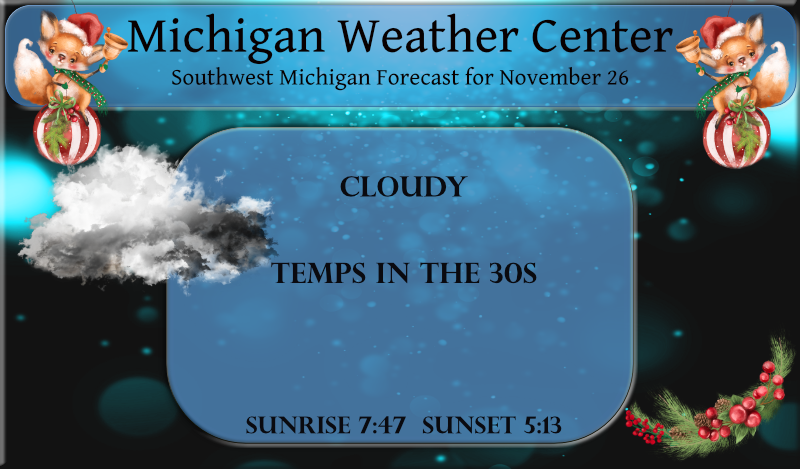 We will see the snow showers diminish today with temps rising to only the low to mid-30s so bundle up and take care if you are one of the brave souls who venture out to the black Friday sales.  (I never have and never will).

Our next chance of snow will come late tomorrow as another clipper system descends from the north.  Below is yesterday’s snow cover map:

Who would have thought will all the warm weather hype!

Hope you all had a Happy Thanksgiving. We did. We got together with our daughters and grandkids and had a wonderful day. It felt good just being together this year. We had dinner and played games and talked. It couldn’t have been any better.

I hope everyone had a wonderful Thanksgiving. We had a bunch of family over. Light rain and drizzle all day, so no football following the feast. It was a very good day.

Welcome to Black Friday. Growing up in Alpena and Bay City I do not remember calling it “Black Friday” it was in fact just the day after Thanksgiving. Yes it was the start of the Christmas shopping season and stores had the after Thanksgiving sales but they did not call it “Black Friday” and it was the day of the lighting of the city Christmas tree. Anyway yesterdays light rain changed to light snow here around 5 PM but there was not much snow here and just a trace in on the ground this AM. The overnight low here was… Read more »

I grew-up in the Garden City area and we did not have Black Friday either. We had some light snow here too before everyone left.