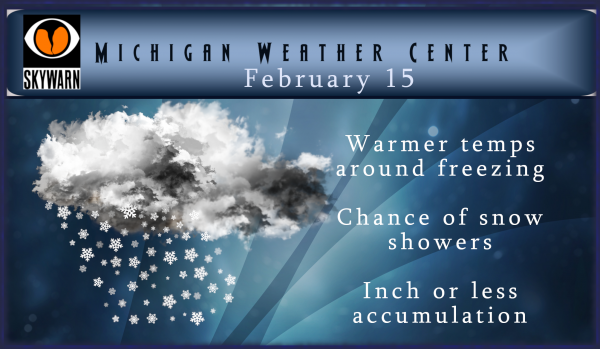 While this winter season has been mild with much below average snow fall.

In the past there have been some very big snowstorms in mid-February. While Michigan for the most part doesn’t get many big time snowstorms in Mid-February that is not the case in some locations. Here some weather events in mid February’s past. All of the events happened on February 14 or 15.

1899
A great blizzard ended along the eastern United States giving Washington DC 20.5 inches of snow to bring their total snow depth to nearly three feet and ended here late in the evening of the 14th. The storm produced 36 inches of snow at Cape May NJ.
(Ref. Virginia Weather History)

1940
Famous Valley Storm barometer was 29.04 NW wind at 34 mph and rain changing to snow and the temperature fell to 10 °F. Valentine’s Day Blizzard hit the northeastern United States Up to a foot and a half of snow blanketed southern New England, and whole gales accompanied the heavy snow stranding many in downtown Boston.

1989
While Valentine’s Day was a soggy one in the Ohio Valley and the Tennessee Valley, unseasonably warm weather prevailed in the southeastern United States Seventeen cities reported record high temperatures for the date as readings warmed into the 70s and 80s.
(The National Weather Summary)

1990
Valentine’s Day was a snowy one for many parts of the western and central United States five to ten inches of snow fell across Iowa. Six to 12 inches of snow blanketed northern Illinois, and strong northeasterly winds accompanied the heavy snow. Air traffic came to a halt during the evening at O’Hare Airport in Chicago, where 9.7 inches of snow was reported. More than 250 traffic accidents were reported around Des Moines IA during the evening rush hour. An ice storm glazed east central sections of Illinois, causing twelve million dollars damage in Champaign County alone. But it was warm in the Eastern United States

1958
The fifth greatest snow for Washington, DC was 14.5 inches. Baltimore, Maryland had 22 inches of snow and 5,000 people were stranded at Bowie Race Track

The storm center developed over Texas on Valentine’s Day. The storm tracked rapidly southeast into a position near Mobile out all about, on February 15, and then it recurved to the Northeast and began to intensify. The storm center past over Columbia, South Carolina and deepened quickly as it moved northeast across North Carolina and off the Virginia Capes. By midnight, of the 16th, the low was just east of the Delmarva Peninsula, with a central pressure of 28.80 inches. Between 14 to 18 inches of snow fell across the Washington area. Winds were sustained at 30 to 40 mph for several days after the storm, causing terrible drifting, in many instances to at least 6 feet. Snowfall rates during the storm were among the heaviest ever record at National Airport 11 inches of snow fell and just a 5 hour period and over 3 inches of snow fell during a one hour period. Generally, a snowfall of 10 to 20 inches occurred from Alabama to a Massachusetts. Up to 30 inches was reported in North East Pennsylvania. The heaviest snow than was about 50 mi. wide and passed directly through the Washington-Baltimore area. Within this band, 15 to 20 inches of snow fell, with 22 inches of snow reported it in the northern suburbs of Baltimore.
Ref. (NWS Ranking for Storms between 1956 and 2011) This is the 11th Worst Snowstorm

1982
A “meteorological bomb” exploded in the Atlantic southeast of Newfoundland. The term is used to describe a storm that rapidly intensifies over the ocean. An intense cyclone off the Atlantic coast capsized a drilling rig killing 84 persons, and sank a Soviet freighter resulting in 33 more deaths. The cyclone produced 80 mph winds that whipped the water into waves fifty feet high.
(Ref. Wilson Wx. History)

1989
Thirty-seven cities in the southeastern United States reported record high temperatures for the date. The afternoon high of 80 degrees at Atlanta GA was a February record. Highs of 79 degrees at Chattanooga TN, 84 degrees at Columbia SC and 85 degrees at New Orleans LA equaled February records.
(The National Weather Summary)

2003
On this date through the 17th, the President’s Day Storm buried the U.S. East Coast. Many all-time snowfall records were broken, including those in Baltimore, MD and Boston, MA. The storm system brought accumulations of 1 to 2 feet with snowfall amounts exceeding 35 inches across parts of northeastern West Virginia, the heaviest snow accumulations to the East Coast since the Blizzard of 1996.
(Ref. Wilson Wx. History)
Map of the Snowfall Amounts

2004
Tennessee:
Up to 11 inches of snow fall in areas south of Nashville, causing power outages and producing hazardous driving conditions.

That was just a little history for Mid February

Just to show how mild this winter has been

The low here at my house was +8.1° but officially at the airport when no one was looking it dropped down to +4 and that has a good chance of being the coldest low for the winter of 2019/20 and if that is the case it will be one of the warmest lowest winter lows here at Grand Rapids  A list of winters with warmer lowest that I can find are 1920/21 and 1937/38.

Doesn’t look like much snow in the near future!! Time to start the transition to landscraping!!!!

Just another perfect winter day! Incredible ski conditions right now! It could not be better! Later People! Get outside and enjoy the winter wonderland!!

Get ready for more snowstorms!

The snow just keep coming. No sign of any let up!

Well the “pounding” from the snow is done, 7 or 8 tenths of an inch. Now it’s freezing drizzle/rain.

Currently we are getting pounded with snow! I love these long winters!

Roads are verry slippery in MOST of west Michigan ..Should of been a WWA for GR!! INDY

8 out of the last 9 days we had snow in MOST of west Michigan amazing!! INDY

Great winter pattern! Nothing better than cold and snow!

We’re in Holland for a hockey tournament. Where’s all the snow??

Not anywhere around here! Almost nothing for lake effect again this season. You at Griffs Ice house West? We’ve taken the kids there for years to go ice skating.

Yep this is our 3rd year at this tourney. Griffs does a good job.

Well if you’re out before 7 and looking for supper, 421 E Main here in Zeeland. Ask for me!

Thanks. Just got steamrolled by a Chicago team 8-2. We’re heading to the hotel. Boys want to swim.

You tell me! The radar shows snow in Holland currently! Plus if you want tons of snow it is a short one to 2 hr drive up to snow country!!!!!! Get with the program!

There is 4″ of snow on the ground here at my house and it is reported to be 7″ at Muskegon there is no report for Holland. I thought that they would have picked up some yesterday.
Slim

It never snows in Zeeland does it?

Nice read Slim. Glad we’re having such a crazy mild Winter this year and not any storms like those! Looks like this Winter will be summed up as 2 cold days and pretty much the rest historically mild.

Currently we are in a cold and snowy pattern! Who would have thought?

Yes the long range cpc is a thing of beauty!

Here is the 3 month temp outlook.

The berry’s won’t be growing on trees anytime soon…keep them winter maps a coming ROCKY ….INDY

It is another GREAT winter day outside. I was up in the Traverse city area yesterday and WOW! over a foot of snow on the ground and perfect mid winter conditions! Absolutely incredible! Keep it rocking! I love these long winters!

Our low this morning was 1 degree at 3:40 am – had to look twice at my weather graph to see if I was seeing correctly in the morning fog before the coffee kicks in. Temp has been steadily rising since then, currently 11.7.