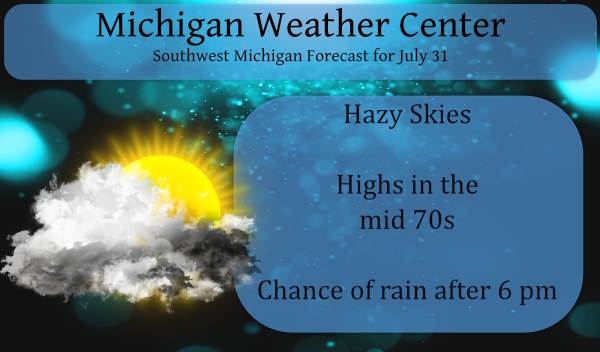 It seems it was just yesterday when we were looking forward to longer days with warm sunshine. Well we are now about to turn the calendar to August. Stepping back and looking and how some others look at our weather the following is from an English travel site.

“August is delectably warm in Michigan with mostly sunny days and dry conditions across the state. The average temperatures in the state are in the zone of 50°F (10°C) to 82°F (27.8°C)
The precipitation is to the tune of 3″ (76.2mm) to 4″ (101.6mm), and mostly in the form of thunderstorms and occasional showers. The growing season is at a high with frost-free soil, moderate rainfall, and temperate conditions.
Light summer clothing is suitable during the day, but cover the lower body during the evenings. The fishing season is in full swing, and the hunting season is at its peak in the temperate weather. There is rarely a lovely time as August to set sail on one of the schooners and get away from the city lights. Bike an urban trail on a fine Sunday morning for an experience of nature in the city. August is a highly desirable time to visit Michigan but be prepared to spend more on accommodations.”

Here is some averages and a brief look as some past weather here in Grand Rapids.

A little thunderstorm going on here. It doesn’t look like it will last long according to radar. The thunder is loud enough to make you jump!!

It was beautiful outside today!! I love these cooler temps and much lower humidity. You can be outside and actually enjoy it. 🙂

You know it! It has been awesome! No heat waves at all! Who would have thought?

Low of 52* degrees out in my AREA this morning loving the Fall feel in the air …INDY!

68 here currently. Going to the lake and having a fish fry/clam bake. It will be spectacular today.

The overnight low both here and at the airport was a cool 54. At this time it is clear and 55 here. July 2021 will end up just a tad below the new 30 year average
Slim