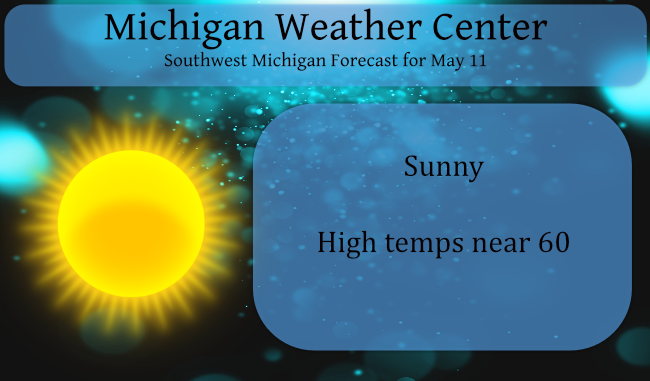 We have another 28° morning (4:30 am temp).  We will see a slow warming trend over the rest of the week though we will be moisture starved until we get into next week as we see a gradual pattern change into warmer wetter conditions which are sorely needed.

1923: A very late-season winter storm dropped up to a foot of snow across Lower Michigan. Records were set for May snowfall at many places including Lansing with 11.5 inches, Grand Rapids with 5.5 inches, and Detroit with 6 inches.

1927: About 40 farm buildings are damaged or destroyed as a tornado moved from near Loomis in Isabella County, across southeast Clare County and into Gladwin County. Another tornado destroyed two barns and damaged two homes three miles west of Walker.

1902: A snowstorm drops from 1 to 6 inches of slushy snow across Lower Michigan. The four inches of snow at Muskegon is the latest measurable snow on record there

2006: A small weak tornado, determined to be a “landspout” moved through an open field near Schoolcraft in Kalamazoo County, doing no damage.

1956: A severe weather outbreak produces tornadoes, high winds and large hail across Lower Michigan. A deadly tornado hit near Flint for the second time in three years, killing three people on the southeast side of the city. One person was killed in Gratiot County as a tornado moved between Alma and Ithaca. Muskegon was pelted with baseball-sized hail that caused thousands of dollars in damage to homes and cars.

1980: Kalamazoo was hit by a tornado that killed five people and injured 79 others. Fifty million dollars damage was done as the tornado damaged or destroyed nearly 300 homes and over 150 businesses.

1886: A tornado injured one person and damaged several homes north of Lansing. The injury occurred as a conductor was blown from a train.

2004: A tornado struck the southeast side of Maple Rapids, destroying a silo and damaging two others. A shed was also damaged. A couple of two-by-fours were driven into the side of a pole barn. Shingles were damaged and ripped off of two homes.

1855: A tornado destroys at least one building as it moves from Jackson to Washtenaw County.

On May 9, 1923, a late-season snowstorm pounded Southeast Michigan. Six inches of snow was recorded in Detroit, with areas around Flint and Saginaw receiving around a foot! Widespread damage was also reported with trees and power lines snapping under the heavy wet snow.

On May 11, 1974, an F3 tornado moved through Livingston County at 5:31 PM, near the community of Hell. This tornado only traveled less than a mile but was responsible for one fatality, 3 destroyed houses and 15 damaged houses.

On May 13, 1912, Detroit reported a record for the latest snow accumulating an inch or more. The snow was measured at 1.5 inches.

Also on May 15, 2007, there were 40 severe wind and hail reports across Southeast Michigan including tennis ball size hail in Bad Axe and a measured 74 mph wind gust in Howell.

I watched the local news on a Detroit station this morning. The met said they are -4.00″ precipitation YTD.

Officially at Grand Rapids we are now -5.32″ YTD. That seems like a lot but with some big time summer thunderstorms that still could be made up. At this time it is a rather nice May day. With full sun and light winds it is now up to 66 here at my house.
Slim

Although of all years to have record low amounts of rain, it is probably best to have it the year after record high amounts of rain. But you are right, an active hurricane season could supply us with plenty of rain later in the summer.

Ahhh looks like summer weather begins in a day or two! Get ready for at least 4 months of pure bliss!

Low 70″s is Summer weather?? well I guess it’s a start! By the way welcome back to the blog lol …INDY

As you know mookie is a delusional warm weather nut!

There are indications that the later part of May will become both warmer and wetter.
Slim

The low here at my house just like at Indy’s was 29. It looks like the official low at GRR was around 35. At this time it is sunny and 41 here.
Slim

The low here at my house was 29. There was not a lot of frost but still cold.
Slim

Wow 29* degrees this morning out in my area we will say that’s a cold mid May morning!! Looking for some great warmer weather this weekend ….INDY