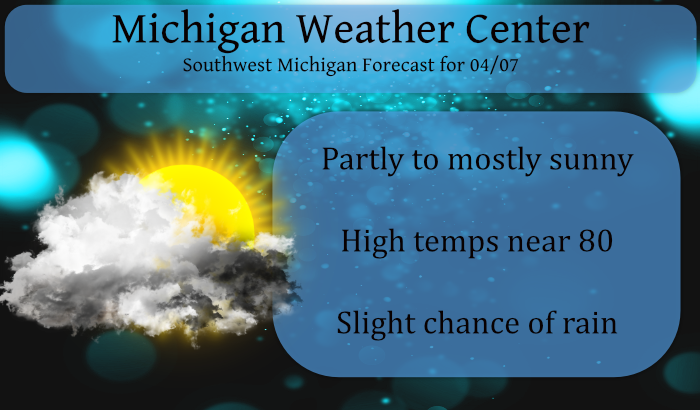 We reached 81° yesterday down here in the valley of Otsego and we have another day which could push to the same temps.  Some scattered showers may develop late in the afternoon into the evening. On-and-off downpours and scattered thunderstorms will be more likely on Thursday. This weekend’s weather is unsettled, with a chance for soaking rain between Saturday afternoon and Sunday morning.  All of this could mean only one thing – we will be mowing grass very soon.  With the promise of soaking rain, it would also be a good time to put out the weed and feed on the lawns. 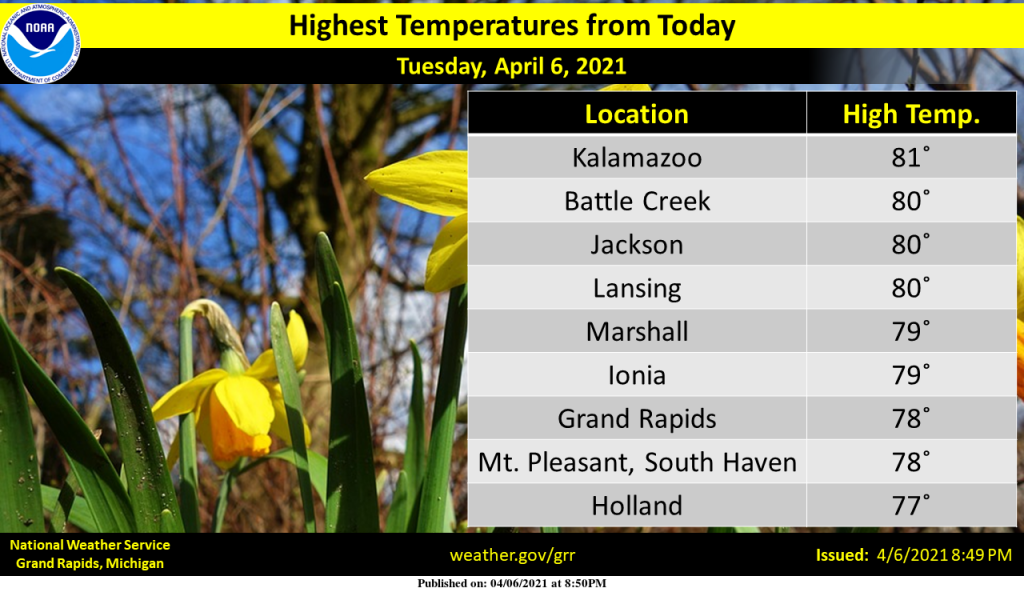 On April 4, 2003, a severe two-day ice storm ended over southeast Michigan. The storm was responsible for up to an inch of accumulated ice in Oakland County, which caused 500,000 people to be without power and $50 million in damage!

Also on April 5, 1982, a snowstorm hit Southeast Michigan in the evening hours and continued into the 6th. The storm moved across the Ohio River Valley and left Detroit with 7.4 inches of snow, Flint with 7.1 inches, and Saginaw with 4.0 inches.

On April 6, 2009, a low-pressure system tracking northeast through the Ohio River Valley produced a late season heavy snowfall across Southeast Michigan. Snowfall totals averaged 1 to 4 inches south of I-94, 4 to 8 inches between I-94 and I-69, and 1 to 4 inches north of I-69. Due to the heavy snow and winds to around 30 mph, tree branches came down which resulted in power outages focused along the M-59 corridor. Some of the higher snowfall included Grand Blanc 6.3 inches, Elba 7.0 inches, Cement City 6.0 inches, Howell 6.3 inches, Shelby Township 6.4 inches, White Lake 7.8 inches, Deckerville 6.0 inches, Ann Arbor 6.0 inches, and Romulus 6.7 inches.

On April 6, 1886, the biggest snowfall ever recorded in Detroit in a 24 hour period occurred with 24.5 inches. This snow had a very high water content (2.43 inches) and was therefore very heavy and packed. This made it difficult for residents and services, such as police and medical, to travel anywhere. Amazingly, the next day temperatures rose to 40 degrees and up into the 50s later in the week.

Also on April 6, 1882, the earliest recorded Michigan tornado outbreak hit Southern Lower Michigan. Six tornadoes rolled across the southern part of the state including Midland, Bay, Livingston and Oakland Counties. In the state there were 10 deaths and 54 injuries as a result of the outbreak. The Midland tornado started just north of Midland and ended near Inwood in Bay County. This tornado was responsible for 1 death and 15 injuries. The Livingston tornado started near Hartland and moved to Clyde in Oakland County. Five homes were destroyed near Clyde where the 3 deaths and three injuries were reported.

On April 9, 2016, a late-season snowstorm that begins the night before produced significant snowfall over southern portions of the area. Adrian measured 7.2 inches and 6 to 7 inches fell in Temperance, the Irish Hills, and Manchester.

On April 10, 1977 the temperature rose from a pre-dawn low of 35 degrees to an afternoon high of 86, or a 51 degree rise, the greatest daily temperature rise ever recorded in Detroit.

2003: A devastating ice storm strikes central Lower Michigan. Heavy rain from thunderstorms falls into a layer of cold air near the ground and freezes on contact, creating sheaths of ice up to 3 inches thick that brings down thousands of tree limbs. It was estimated that 450,000 homes and businesses lost power during the storm and that nearly 50,000 people were without power for a week as persistent cold temperatures keep the heavy ice on the trees for 4 days after the storm. Crews came from four different states to help local utility companies restore power.

1982: Arctic air pours into Lower Michigan in the wake of a snowstorm and lake effect snows pile up over a foot across western Lower Michigan. The 12 inches of snow at Muskegon makes this the snowiest April day on record there.

1882: A tornado outbreak strikes Lower Michigan, killing 10 people and injuring more than 50 others. Tornadoes struck Midland and Kalamazoo Counties, killing one person each. Four people were killed in a tornado that moved between Bedford and Charlotte. Three people were killed in Oakland County by a tornado that passed between Clyde and West Highland. A tornado that struck east of Dansville in Ingham County killed one person. A barn and home were destroyed by a tornado a mile west of Charlotte, but no one was killed.

1997: A strong cold front moved through with a line of thunderstorms producing wind gusts to 70 mph and causing widespread damage across much of southern Lower Michigan.

1954: A tornado destroyed two barns and damaged a house and apartment building near Fulton in Kalamazoo County.

1982: Temperatures plunge to near zero as arctic high pressure persists over the Great Lakes states. Lansing falls to 2 below zero for a record low for the date and the latest sub-zero temperature on record. Muskegon falls to one degree above zero and Grand Rapids to 3 above for their coldest April temperatures on record.

1938: A snowstorm drops several inches of snow across southern Lower Michigan. Lansing sets a record for the day with 5.1 inches and Grand Rapids with 4.3 inches.

1947: Three to five inches of rain and warmer temperatures combine with melting snowpack and partially frozen ground to cause some disastrous flooding along the Grand and Kalamazoo Rivers. Millions of dollars of damage occur as large sections of Grand Rapids, including the Comstock Park area, are under several feet of water.

1969: A brief tornado damaged a house near Loomis in Isabella County.

1973: A snowstorm dumps 3 to 8 inches of snow across much of Lower Michigan. Record snowfall for the date includes the 6.5 inches at Muskegon, 5.2 inches at Lansing and 4.4 inches at Grand Rapids.

2008: A tornado hit from near Plainwell in Allegan County to Doster in Barry County at 1:40 a.m. It did significant damage to a horse barn, lifted a trailer adjacent to the barn, damaged gravel yard equipment, lofted a tank, and uprooted numerous large trees.

1977: A three day spell of 80 degree temperatures begins across Lower Michigan. Record highs include the 81 degrees at Lansing, where temperatures would hit records of 82 degrees on the 11th and 83 on the 12th.

Todays official high of 78 is the earliest day to reach 78 since 2005. At this time it is rather dark to the west and the current unofficial temperature here is 80 and some rain has just started.
Slim

I assume that should read 2015, correct?

Just like yesterday, 1 stray shower just came over top of us. It was pouring sideways with the wind, now the suns coming out again. Temp dropped from 80 to 62 and back on the way up.

Sitting out on the deck today getting drunk in the sun getting sun tan woo woo hump day at it’s best ….INDY

I remember the ice storm from April 2003 pretty well, even though I was only a few years old at the time. I remember sitting in my living room and seeing a powerful lightning strike outside and then losing power. We then went to a hotel the next day and right when we checked in our power apparently came back on so we returned home.

What about the daily high temps? That’s more what I was referring to, not the daily mean.