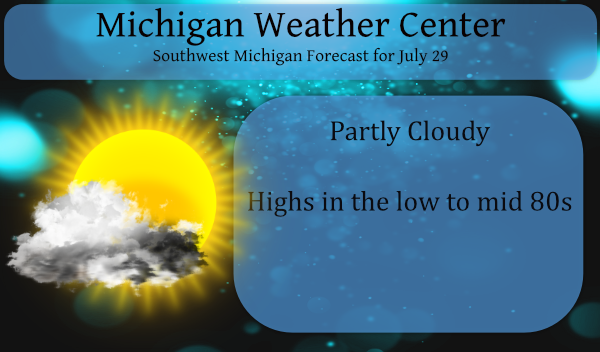 We had a storm cell move through early this morning prompting warnings from the NWS.  Lots of lightning, thunder, wind and rain.  A Thunderstorm watch remains in effect until 9 am.

We had .80 of an inch of rain from the storm with an 18 mph wind gust which is pretty good seeing how we are in the middle of the wood in a valley.  Further east in Plainwell they had a gust up to around 30 mph in the flatlands.  Most of the rest of the state appears to have escaped the rain and severe weather.

1943: The USS Muskegon, named after the Michigan city, is launched from Superior, Wisconsin on a day with scattered showers and a high temperature of 86 degrees at Muskegon, Michigan. The ship saw duty in World War Two, escorting convoys across the Atlantic. The ship also took weather observations and served as a radio and lightship for trans-Atlantic flights until after the end of the war.

2005: An extended round of severe weather from the evening of July 25th into the morning of the 26th produced widespread wind damage across Lower Michigan. A tornado struck three miles west of Baldwin and downed hundreds of trees at a campground. Fortunately, most of the campers had left just hours earlier, and there were no injuries.

1896: A tornado struck a few miles northeast of Battle Creek, seriously injuring one person as it destroyed a farm home and barns in Pennfield Township, Calhoun County.

1973: A tornado damaged a mobile home and some farm wagons two miles southeast of Clare, Michigan.

1894: The temperature hit 100 degrees at Lansing during the second record heatwave of the month, the first of which occurred a week earlier when Lansing set its all-time record of 102 degrees

1955: Temperatures reached the upper 90s for the second day in a row across West Michigan in one of the hottest months on record. At Grand Rapids, 15 days had high temperatures above 90 degrees during July 1955.

2002: A severe weather outbreak produces tornado and downburst wind damage. A tornado with top winds around 80 mph touched down about one mile east of Augusta in Kalamazoo County. The tornado passed through Fort Custer in western Calhoun County, about one mile northwest of the Battle Creek airport. The damage path was approximately 800 yards wide and the path length was 3 miles long. Extensive tree damage occurred in the Fort Custer area and the roof was blown off a firing range shelter. After the tornado ended, downburst damage continued for several more miles in Calhoun County. A severe thunderstorm struck a campground and mobile home park along Swan Lake in southern Allegan County. Trees were blown down onto mobile homes and small boats were blown out of the lake. Two minor injuries occurred. Top winds with the downburst were estimated at 70 mph.

1959: A steady rain brought relief from drought conditions across West Michigan. Dry weather began in April, resulting in water rationing in Grand Rapids by the middle of July.

1976: A tornado injures five people northwest of Grand Rapids as it damages a warehouse.

1996: A weak, short-lived tornado damaged a pole barn near Evart in Osceola County.

1916: Temperatures soared to record highs as a ten-day heatwave reached its peak. The 102 degrees at Lansing would tie the record for the hottest day ever there. Grand Rapids hit 103 degrees as part of a record string of four consecutive days of 100 degrees or higher. Even the Lake Michigan shore was baking, with Muskegon hitting 95 degrees.

2008: A tornado struck about three miles north of Clare at 3:17 a.m. A barn collapsed and the roof of a carport was blown into a stand of trees. Several other trees were either snapped off or uprooted.

1883: Very heavy rains during June and July cause the Grand River to rise to unusually high summer levels. Lumber companies use the high water to float logs to a log boom upstream of Grand Rapids. The logs broke loose and crashed into the Detroit, Grand Haven & Milwaukee Railroad bridge creating a jam estimated at thirty feet deep and seven miles long. Sections of Grand Rapids were flooded by backwater. Eventually, the bridge gave way and several bridges downstream were damaged by the cascading logs.

1917: A heatwave produced record highs in the upper 90s as July ended, with Grand Rapids hitting 98 degrees and Lansing 96 degrees. There were also record high minimum temperatures of 79 degrees at Grand Rapids and 74 at Lansing.

On July 26, 2012, training thunderstorms produced a band of torrential rainfall and some severe weather mainly north of the I-96 corridor. Despite strong winds downing some trees and power lines north of I-69, the main impact was heavy rainfall, including a 2-day (July 25-26) total swath of 1″ to 2″ across the Saginaw valley

On July 26, 2007, numerous reports of large hail occurred with storms that blew up in the very unstable air mass over Southeast Lower Michigan. The worst of these storms hit eastern Shiawassee County (around Durand) and further south in Lenawee and Monroe counties (in and around Adrian, Petersburg and Samaria). Hail up to the size of golf and ping-pong balls were seen in a few of the worst storms!

On July 27, 2014, an atmosphere ripe for the generation of large hail erupted over Southeast Michigan resulting in widespread severe weather. Numerous reports of wind damage and heavy rainfall were received. However, it was the significant hail that made this event unique. Hail reached 2.5 inches in diameter just north of Milford in Oakland County and 3 inches (larger than a baseball) in Bay County.

Also on July 27, 1928, 3.07 inches of rainfall fell in Saginaw. This is the precipitation record for the month of July in Saginaw and is also greater than the average amount of precipitation Saginaw receives for the entire month of July (2.50 inches)! Also in 2004, temperatures hovered in the mid-50s to 60s as a steady rain fell. The record low maximum of 64 (which occurred just after midnight) broke the old record of 70 degrees set back in 1874.

On July 28, 2011, intense thunderstorm rain from about 2 a.m. to noon, led to rainfall totals of 3 to 7 inches which lead to flash flooding across Shiawassee, Genesee, Livingston, Oakland, Washtenaw and Wayne Counties. Some of the heavier rainfall totals included 5.5 inches in Goodrich, 6.26 inches in Ypsilanti, 6.5 inches in Chelsea.

On July 28, 2010, severe thunderstorms developed over Metro Detroit. Among the 15 wind and wind damage reports was a measured wind gust to 73 mph at Selfridge ANGB.

On July 31, 1925, the greatest rainfall for a calendar date in Detroit occurred on this date when 4.74″ fell. Also, back in 1891, this date marked the end of the coldest July ever recorded in Detroit, with a mean temperature of only 67.2 degrees, well over six degrees below the current norm!

Currently 78* degrees in my area not GR …INDY

Nope. Just another well above average day. Currently 85 at GRR with a heat index over 90 again. HOT!

As for the storms early this morning, they certainly did not fall apart over the lake as someone yesterday predicted. I was watching the radar at 4am and the line of storms actually intensified a lot around mid lake as they came this way. As Slim stated, an incredible amount of lightening for a good hour or so. No trees down this time, but it was quite something to watch.

The lake is 75-78 degrees at the surface (well it was yesterday before the upwelling) so I agree, it seems unlikely the lake would have had an impact.

They definitely dissipated and split up! I had virtually no rain, no wind, no lightning, no thunder, etc, it could be the worst forecast in history!

What’s new we hardly get any good storms anymore because of timmin and lake Michigan like no heat in sight I have been saying this since May but the warm 3 think 84* degrees is hot lol….We haven’t any real heat this summer sofar let’s be real here …INDY

Only one 90* degree day recorded in my area sofar this Summer such a breeze ..INDY

With the official high so far this month of 89 this will be the first July that it has not reached 90 or better since 2014 and only the 5th time in the last 30 years. It has now became cloudy and the temperature is now at 75 here with the clouds.
Slim

Wow …. Now on to a taste of Fall weather!! INDY

I know they don’t have them, but I would be more interested in seeing the stats on the number of days with the heat index in the 90’s. Temperature is only a part of how it feels out, humidity plays a bigger roll. I’m pretty sure there was no one walking around stating how cool it was when the temp is 88, dew point is 75, and the heat index is around 95. We have had a lot of hot days already, mainly because of the high dew points.

No 90’s and now a cold front coming through! The below normal temp pattern keeps rocking!

Thanks for the facts …INDY

Here in my area there were no storms last night. In fact I only received 0.10 of rain fall. Last night was a good reminder that mother nature doesn’t read the NWS reports nor watch the TV weather reports. To the west there was a lot and I mean a lot of lightning last night. The overnight low here was a warm 73 and at this time it is partly cloudy and 75.
Slim

No derecho here, but I am not disappointed one bit.

76 at 5a. Very warm. Tomorrow’s high is only supposed to be 74. I am looking forward that. It’s been a long time since I’ve been able to turn off the a/c and open the windows.

This was the worst weather fiercest of all time! My point forecast showed us getting 1.5 inches of rain and we have seen less than a tenth of an inch of rain with nothing on the radar! Also virtually no wind and surely no storms! What total hype! What a total joke! Horrendous!

Storm Hype 8, with the loss again!