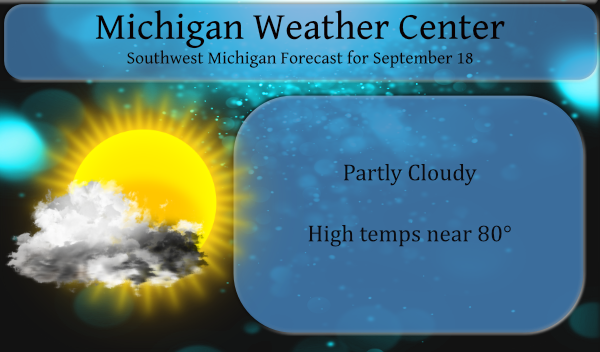 While it has been somewhat dry this year this week post is about a September that was very wet and caused some of the worst flooding in central Michigan’s history.

This month marks the 35th anniversary of the Great Flood of 1986, an incredible weather event that was described as “Michigan’s greatest natural disaster.”

Using past media reports and the Federal Emergency Management Agency (FEMA) report from the incident, here are the numbers that describe the scope of the rainfall and the damage it caused.

Heavy rainfall started this day. The storm system measured 180 miles east to west and 60 miles north to south in central Michigan. Rainfall amounts ranged between 8- and 14-inches, according to FEMA. That rain fall continued through Sept. 12, but Central Michigan also received 26 consecutive days of rainfall.

Rainfall totals in the month of September:

Measurements in inches. (Amount in parentheses fell between Sept. 10-12)

Total damage was estimated at $505.2 million in 1986 dollars. Using the federal government’s CPI inflation calculation, damage in today’s dollars would be more than $1.1 billion. A majority of the cost is due to crop loss, being that floods hit during the harvest season.

Farmers took the hardest hit during the flood. The graphic to the left is a four-county breakdown of the crop loss with corn, soybeans, dry beans and sugar beets.

Workers who became unemployed because of the flooding were allowed to file for unemployment benefits. Michigan Employment Security Commission officials at the time estimated the flood left about 1,200 people jobless, with claims totaling about $945,000.

The maximum a worker could receive in unemployment at the time was $197 per week.

So while there has been talk of how dry or how “hot” it has been it sure could be a whole lot worse.

Not much information to post on this but WxBell going all in on a cold December. We shall see.
Slim

Just a thought on the coming pattern change: I took a look at average temperatures for this coming week and they generally are around 70 degrees. So even though this coming week looks much cooler than what we have been experiencing, it does not look that far from average overall. Monday will be well above average by 10+ degrees. Tuesday looks right around average. Wednesday/Thursday look well below average by 8-10 degrees. Friday/Saturday/Sunday look right around average to slightly above/below depending on the model… So overall this week looks pretty typical of mid/late September. But definitely a change from what… Read more »

Also as we all know, temperature fluctuations become more common in the fall as the cooler air battles the warmer air. So this week definitely looks typical of late September to me.

Those are some crazy rain totals! Oddly I don’t remember a thing of it. Of course I also would have been 16 and had my license for just over a month. My entire focus back then was working on my car and racing it at the Martin drag strip. Every single weekend!

I was thinking the same thing. I was wrenching on my Monte Carlo and chasing girls. 😁

Yup, I remember that September – I had a hobby farm back then where I grew popcorn. We had a lot of rain, luckily no damage to the crops – the ducks loved it though.
Yesterday we had a high of 84 degrees with a low of 55.
Our overnight low is 63 at 6 am. Of course, once again no rain to report.

Get ready for the cold next week! Incredible!