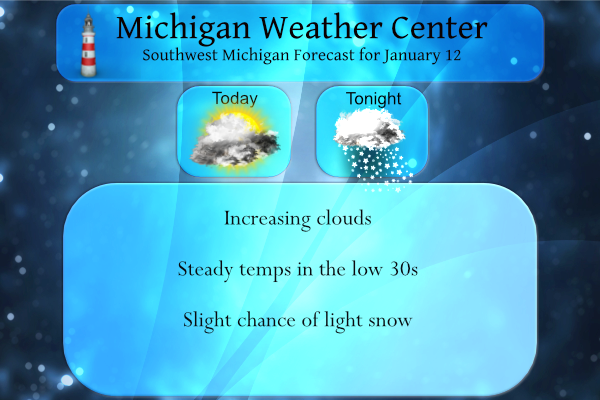 We have a temp of 33° at 6 am this morning.  Yesterday’s high was 32° and the low was 10°.  Clouds will increase this morning with weakening winds. We’ll see a chance for some light precip this afternoon but most areas should stay dry. Conditions then look to turn unseasonably cold to finish the week.

1930: A snowstorm drops from 4 to 8 inches of snow across southwest Lower Michigan.

1977: Record cold prevails during one of the most severe winters in Michigan history. Records include the 17 below zero at Lansing, 14 below at Grand Rapids and 8 below at Muskegon.

2015: Temperatures in the single numbers and lake effect snow showers create icy roads resulting in a 193 car pileup on Interstate 94 and both east and westbound lanes are shut down between Battle Creek and Galesburg.

1982: Extreme arctic outbreak brings record cold temperatures and massive lake effect snow totals. Muskegon has its snowiest calendar day on record with 22 inches. This contributes to the all-time record monthly snowfall of 102.4 inches (8 and a half feet!) at Muskegon for January 1982.

1890: Temperatures reach a record high of 63 degrees at Lansing during one of the warmest Januarys on record.

1979: Arctic air and a deep snow cover combine to drop the temperature to a record low of 21 below zero at Grand Rapids.

1912: Muskegon sets their all-time record low for the month of January at 21 degrees below zero during their coldest month on record.

1918: Record cold is experienced at Lansing with 18 degrees below zero and Grand Rapids at 14 below during one of the coldest winters on record.

1952: Dense fog with visibility near zero leads to a number of auto accidents across southwest Lower Michigan. The fog persists for three days from the 12th to the 14th.

1979: A massive storm dumps heavy snow across southern Lower Michigan. Temperatures in the teens and strong winds lead to heavy drifting of the powdery snow, causing travel to come to a halt. The snow, at times falling at more than an inch an hour, caused power outages due to broken tree limbs. Snow accumulations were up to 3 feet, causing some roofs to collapse. South Haven had 21 inches of new snow added to 24 inches already on the ground. Grand Rapids saw 13.5 inches of snow and 2 to 4-foot drifts with wind gusts between 25 and 35 miles an hour.

1893: A long siege of arctic cold drops the temperature below zero for 15 out of the first 19 days of January at Lansing. This is the coldest day of the month with a low of 16 below zero.

1932: Grand Rapids is in the midst of a stretch of six days with temperatures above freezing during the warmest January on record.

2005: Two days of heavy rain and high temperatures in the 50s are followed by a stretch of arctic cold, causing massive ice jams to form on the Grand River. The ice jams result in devastating flooding of Robinson Township in Ottawa County. Flooding also occurs on stretches of the Muskegon, Thornapple, Flat and Kalamazoo rivers.

2015: Arctic air and clear skies allow temperatures to drop well below zero. Grand Rapids sets a record low for the second consecutive day with a low of 13 degrees below zero.

1984: Lansing plunges to 25 below zero and Grand Rapids falls to 14 below during a stretch of arctic cold. Temperatures are below zero for eight straight days at Lansing between the 14th and the 21st.

On January 9, 2004, a band of lake effect snow formed over Lake Huron and dropped 4-6 inches of snow across the northeast tip of the thumb.

Also on January 9, 1997, significant ice accumulation on the wings of Comair flight 3272, crashed in a field outside Detroit near Ida, Michigan. The plane was en route from Cincinnati, Ohio. All 29 people, including 26 passengers and three crew members, were killed.

On January 10, 2004, the temperature in the cities of Bad Axe and Richmond dropped to -9 degrees. This turned out to be the coldest air of the season.

On January 11, 2005, the city of Maybee in Monroe County received 7.2 inches of snowfall from a passing snowstorm.

On January 13, 1932, the lowest the temperature fell in Detroit this day was a warm 50 degrees.

Also on January 14, 2004, a “super-clipper” brought heavy amounts of snow across portions of Southeast Lower Michigan. The heaviest amounts included, Port Huron 12.0″, Grand Blanc 11.0″ and 10.9″ at the NWS White Lake. Other areas across the northern/western suburbs of Detroit saw between 7.0″-10.0″, while Detroit Metro Airport received just 4.7″.

On January 15, 1972, the daytime temperature rose to only -3 degrees in Flint. This is the second coldest maximum temperature recorded in the city of Flint!

Also on January 15, 2007, an ice storm hit the greater Flint and Metro Detroit areas. Over 150,000 customers were without power due to the ice accumulations. The storm caused an estimated $2 million in damages. The same storm also left the Tri-Cities and Thumb regions with 4 to 6 inches of snow.

The sun felt so good today. Alot of the ice on my drive way melted or got slushy.

Winter is showing no signs of letting up! More arctic air arriving soon and more accumulating snow next week and then possible snowstorms after that! Who would have thought? Incredible winter so far!

Still around. Rough start to our year as our daughter in law has hospitalized last week, no not Covid. We weren’t sure she was going to make it through the weekend but she’s turned around big time and appears to be headed towards a recovery but with life long side effects. Honestly the weather has been the furthest thing from my mind and on top of that keeping my business running with a third of our staff out. As for the weather, yup, first decent lake snow in a long time last week. Years in fact. Brings us to a… Read more »

I will keep your daughter in law in my prayers. I wish her a speedy recovery.

Here is the definition of winter from Merriam-Webster
Winter noun
win·ter | \ ˈwin-tər
1: the season between autumn and spring comprising in the northern hemisphere usually the months of December, January, and February or as reckoned astronomically extending from the December solstice to the March equinox
2: the colder part of the year
Note there is no mention of it having to be snow in the air or ground for it to be winter. So it has been winter since December 1st just like always.
Slim

What a boring week. I wouldn’t even call this week 2 of winter if it wasn’t for the chilly temps. It looks like we will soon be in below average snowfall again for the season. How can this be? I love short winters!

Breaking Weather NEWS>>>>>West MI will be seeing accumulating snow next week! Stay tuned for updates! Winter is the best and rock n roll will never die!

The ski resorts have had barely any people the past several days because of the subzero wind chills. What a waste!

People are wimps! I have been cross country skiing and snowshoeing day after day! Great winter weather!

The temperature rose to 35 here overnight and it now has dropped some and is 29 here. There is still around 6″ of snow on the ground here in my yard. We are now in the mist of the mid winter doldrums. As it looks cold but very dry for the next 7 to 10 days at least. I went outside for a walk yesterday and in my area one has to be very careful walking as the roads now have a solid hard pack snow cover that is almost ice. So until that clears up a little it will… Read more »

Yes it was VERY slippery last evening. I went for a run which was probably not the best idea.
When I drove to work this morning I did notice the roads were not as glazed over with ice as they were yesterday. With temps in the 30s I think it is helping to reduce the slipperiness a bit.

I was just wondering whether we would hear from Rocky, since there is no snow in the forecast for several days!

While on the subject of posters that have not been on for a while. I know Mookie has popped in this week but I have not seen Barry in a while. I hope he is doing alright.
Slim

Barry is probably still shoveling the 18 inches of snow that his area picked up last week! Welcome to lake effect Barry!

In all fairness to Rocky, this has been a pretty cold/snowy January so far. And the next 2+ weeks look quite chilly. However you are correct that it will probably be too dry for much snow in the foreseeable future.

I don’t mind the clouds as long as we have a lot of snow!

Interesting graphic. No wonder most people prefer the warmer months. Winter in Michigan is cloudy and dark.

We’re in the midst of a boring week of weather.