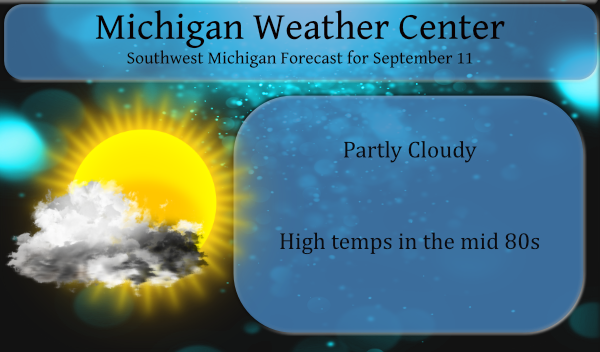 As we all know today marks the 20th anniversary of 9/11. We all know what happened that day so I will not go into the details of the events of that sad day. But feel free to post what you were doing that morning. I was working 3rd shift at that time, and I had already gone to bed so I missed seeing the events as they happened live on TV. My wife was at work and my kids were in school and back then I don’t recall if we had cell phones. Anyway, my wife called me but I did not hear the phone ring at first, but she call several times and I finally did hear the phone ring. She knew I was sleeping so she just told that something really bad was happing in New York.  For the next several days most of us spent many hours watching TV the cable news channels where going 24hrs a day.

The weather in New York that day was sunny and rather warm 81 at Central Park. Here in Grand Rapids it was clear with a high of 73 and a low of 50.

The other day it was mentioned by one of our posters of the number of days Grand Rapids reaches 70 or better and how few (by the posters claims) of the number of days that stay below 40 (Note those are the temperatures that the poster used). While the number of days that the poster stated for Grand Rapids are in the correct range of around 132 for at or above 70 and around 95 for the number of days that if stays below 40. But if fact that is will within range of locations in the interior of the US that are near 43° north and have nothing to do with how long or short our winter or summers are. It should be noted that day with a high of 40 to 50 while not real cold it is none the less not warm either Now comes the question of just what is cool and then cold for humans?  I would think that the vast majority of people will keep their house well above that 40° mark and it would be closer to 65 to 75. I would like to also point out that here at Grand Rapids we average around 135 nights when the temperature drops to 32 and below. So the bottom line is do we have long summers and short winters? Well, we have around 90 days of summer and around 90 days of winter and 180 days of in between.

In regards of winter the Old Farmer’s Almanac is now out and they are calling for a Drum Roll please….A colder and dryer winter in the lower Great Lakes area. With a cold November thru January and then warming up in February. They do not give snowfall guesses. Here once again is the CPC’s long range guess for the winter season

As for the temp stats Slim, do you know what the average # of 80 degree days is a year for us? And where we are at so far? Feeling pretty warm and humid again today with the temp at 82 and the dew point back in the 60’s.

Tuesday morning, which back then was my day off, and my wife and I were about to run to Meijer, kids were all in school. We always had the news on in the morning and we were both thinking, huh, how the heck do they put a fire out that high up in a skyscraper. We saw the 2nd plane hit and it was the stunning, shocking realization that this wasn’t some bizarre fire but rather an attack on our country. The minutes and hours following no one knew what to think. Rumors and reports of planes dropping and crashing… Read more »

While I unfortunately don’t remember the events of that day, I have heard many stories from my parents and relatives. I’ve watched the CNN coverage on YouTube, but the difference is that I know what to expect when watching the video. It would be shocking to have no idea what would happen next.

What is even more shocking is a bunch of domestic white nationalist terrorist tried to overtake the capital on January 6th! Disgraceful!

I was at work. A coworker down the hall was listening to NPR and announced that a plane hit the WTC. Didn’t think much of it until she announced the 2nd plane. Everyone immediately knew that this was an intentional act. CNN was put on the big screen up in the board room. We were told that we could go watch at our leisure. By the time I got up there, it was packed with people. Thirty seconds after my arrival, the first tower fell. Other than gasps of horror and sporadic sobs, it was very quiet in there. I… Read more »

Thanks Slim for this post. I was student teaching in a Kindergarten room. Trying to stay calm and keep the students unaware of what was happening in our world. I did have a Nextel flip phone and called family members at lunch. I have photos of the towers in May of 2001…so crazy to think how the city scape changed 4 months later. We visited the Pentagon memorial about 5 years ago. It is very moving both in the day and at night (it is a must see if you go…how the light from the small pool under each bench… Read more »